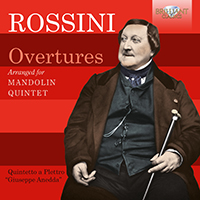 New recordings presenting a fun and unique perspective on the riotous, effervescent, surreal world of Rossini.

All Rossini’s qualities as a musical giant are to be found in concentrated form in the famous overtures. The sheer vitality of the music is astounding, and the wealth of thematic material ensures that each is remarkable in its own different way.

The Rossini anniversary of 2018 presented an opportunity to shed new light on these familiar works, but in a form that the composer himself would have recognised. This long-established mandolin quintet took a mix of old and newly commissioned arrangements and toured them across Italy to great success before making the present recording. The quintet takes its name from the mandolin virtuoso Giuseppe Anedda (1912-97) who popularised the instrument throughout his native Italy with his own ensemble and established for it a place in classical concert halls and modern works beyond the ‘early music revival’ of the 50s and 60s. He took part in pioneering recordings of Vivaldi and early performances of Stravinsky’s Agon.

They commissioned Michele Di Filippo to arrange the first four overtures on this album: L’Italiana in Algeri (1813), Il Viaggio a Reims (1825), La Cenerentola (1817) and La Scala di Seta (1812). The other four overtures are from Il Signor Bruschino (1813), Il Barbiere di Siviglia (1816), Tancredi (1813) and La Gazza Ladra (1817), for which the quintet performs from transcriptions made and published in the first half of the 20th century by Mario Macchioci and Enrico Marucelli. All the arrangements preserve the heady excitement of the famous ‘Rossini crescendo’ as well as the chamber-like dialogue between wind and strings in the original scores.

Rossini was one of the most popular and successful composers of the beginning of the 19th century. His operas were performed all over Europe, and the overtures enjoyed immense success as concert pieces. He usually penned them down the day before the premiere, to the exasperation of the concert managers and the musicians.
All Rossini’s qualities as a musical giant are to be found in concentrated form in the famous overtures. A solid, reliable structure underlies each one, with a slow introduction followed by the main section, a sort of sonata-form with no development consisting of an exposition (first subject, transition, second subject, crescendo and cadenza), a small modulation and a ripresa (with the first subject, transition, second subject, crescendo, cadenza and final cadenza). The sheer vitality of the music is astounding, and the wealth of thematic material ensures that each is remarkable in its own different way.
This new recording presents a selection of 8 overtures, arranged for Mandolin Quintet, consisting of two mandolins, a mandola, guitar and double bass. Included are Il Barbiere di Seviglia, La Gazza Ladra, La Cenerentola and more: a beautiful, brilliant and thoroughly idiomatic performance, in the grand Italian style!
The Mandolin Quintet “Giuseppe Anedda” gives concerts all over the world, enthusiastic advocates of that typical Italian instrument full of surprising possibilities, the Mandolin.
More Less