Home > Catalogue > Scarlatti and the Neapolitan Song: Canzonas and Sonatas

Scarlatti and the Neapolitan Song: Canzonas and Sonatas 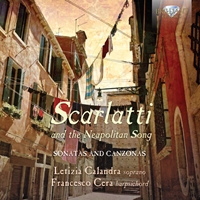 Domenico Scarlatti, the sixth child of the celebrated composer Alessandro Scarlatti, was a prolific keyboard composer, and is best known today for his 555 sonatas for keyboard. Domenico was employed by various members of European royalty and nobility in Italy, Spain and Portugal throughout his career. His style was unusual and innovative, but very few of his works were published during his lifetime.

The disc combines several of Scarlatti’s keyboard sonatas with Neapolitan songs by various composers of the era, exploring the influences of these songs on Scarlatti’s sonatas. Scarlatti’s style is notable for its improvisatory nature as well as its incorporation of elements of Spanish and Portuguese folk music (the composer having spent time in Lisbon, Seville and Madrid), and among the Neapolitan songs featured on the disc is the immensely popular Lo guarracino, a fast-talking and high-spirited number that narrates the story of a fish, and the lilting La Nova Gelosia. Two extracts from operas – ‘So’ li sorbe e le nespole amare’ from Leonardo Vinci’s Lo cecato fauzo and ‘Chi disse ca la femmena’ from Giovanni Battista Pergolesi’s Lo frate ‘nnamorato – are also present, both of which feature a light-hearted portrayal of women. Out of the many versions of the song Quanno nascette ninno, the one by the Nuova Compagnia di Canto Popolare was chosen for this disc, thanks to its fascinating minor modulation.

Acclaimed harpsichordist Francesco Cera is considered one of Italy’s foremost interpreters of early music. He has toured all over the world and his recordings include interpretations of 17th-century keyboard sonatas, French suites and harpsichord concertos by J.S. Bach. Italian soprano Letizia Calandro’s repertoire includes Neapolitan songs alongside the more traditional oeuvres of the Classical and Baroque periods. Having studied at the Santa Cecilia Conservatory in Rome, she won the Spoleto Award and has performed the lead role in operas by composers as diverse as Monteverdi, Mozart and Verdi.