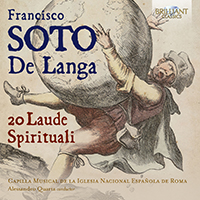 World premiere recordings of sacred songs and popular hymns from late 16th-century Rome, reviving the work of a forgotten Spanish composer within the rich tradition of laude spirituali.
The lauda spirituale is a song of praise designed for congregational singing which arose in medieval Italy, cast in the local language rather than the liturgical language of Latin. St. Francis of Assisi and Jacopone di Todi are the most famous authors of texts which were set as laude spiritual by now-anonymous monk-musicians. Born in the Duero region of Spain in 1534, Francisco Soto De Langa began his musical training as a treble at the Cathedral of Burgo de Osma before travelling to Rome, where he joined the Sistine Chapel Choir inJune 1562: Soto was the first castrato to join its rank. He would go on to sing with the Choir for 49 years – until 1611 – for the last five of which he served as maestro di cappella.

In Rome, he soon encountered St. Philip Neri, founder of the Oratorian church. It was for Neri that Soto composed and arranged the laude spirituali on this album. By this point, the tradition of vernacular hymn singing had evolved from unaccompanied, unison singing to be elaborated with harmony, simple polyphony and instrumental accompaniment. Soto the composer did not write in the refined polyphonic style of Palestrina, his colleague at the Sistine Chapel: these songs and hymns are still fundamentally popular and accessible in character.

To mark the 400th anniversary of Soto’s death in Rome in 1619, the Spanish Church in Rome conceived and realized this project to record a collection of his many surviving hymns, in both Spanish and Italian. The singers are supported by a rich continuo ensemble of violin, theorbos, harp, viola da gamba, percussion and organ, lending colour and variety to the textures. The booklet to this enlightening new release includes an introduction to the history of laude spirituale, the career of Francisco Soto De Langa, and sung texts.

Born in the context of the popular devotion of the peoples of the Mediterranean during the late Middle Ages, the spiritual lauda became well established in the central part of Italy, where a strong oral tradition is still preserved today. They were originally monodic compositions in the vernacular, based on the style of the Occitan troubadours (12th to 14th century), with a regular rhythm and simple melodic form, which could be sung by anyone with or without instrumental accompaniment.
Francisco Soto was born in Langa de Duero, in the present-day province of Soria, Spain, in 1534. He trained musically as a puer cantor in the Cathedral of El Burgo de Osma before leaving for Rome and being admitted in 1562 as a cantor in the Pontifical Musical Chapel, today commonly known as the Sistine Chapel Choir. He was the first castrato to join the choir. He served in Rome as a falsettist soprano for 49 years, until 1611, 5 years of which were spent as maestro uno inter pares of the Cappella Musicale Pontificia, between 1606 and 1611.
This recording presents 20 Laudi, collected from the 5 books of Laudi, published in Rome between 1583 and 1598, written in daring polyphonic arrangements by Soto de Langa.
Performed by La Capilla musical de la Iglesia Nacional Española de Santiago y Montserrat de Roma (The Musical Chapel of Santiago and Montserrat), the heir to the immense artistic-musical heritage that the Spanish have left for centuries in Rome. Some of the most important composers of the European Renaissance, such as Cristóbal de Morales, Francisco Guerrero, Tomás Luis de Victoria and Francisco Soto de Langa himself, have rendered their services in the ancient Roman temples of the Crown of Castile and Aragon. It is the only musical institution in Rome dedicated entirely to the Spanish repertoire. Since 2018 the chapel has been under the direction of Fabjola Lekaj, who has also been the titular organist of the Spanish National Church since 2013.
More Less