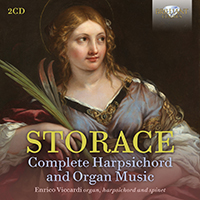 All that is known of Bernardo Storace’s life derives from the title-page of his sole collection of music: in 1664 he was vice-maestro di cappella to the senate of Messina, Sicily. It is not known whether he was an antecedent of the Storace family of singers and musicians active in England at the end of the 18th century. His surviving music is all contained in his Selva di varie compositioni d’intavolatura per cimbalo ed organo, published in Venice in 1664.

While the work of Frescobaldi was surely not unknown to Storace, the later composer’s voice is individual and original. Taken in the round, the collection presents a ‘state of the art’ of keyboard music of the time. There are pieces such as passamezzi and ground-bass variations that adhere to a particular tradition and others that are
more modern, with deliberate departures from established modes that embrace both a new tonal handling of harmony and echoes of a more antique and modal approach. Among the collection’s most novel features is its final piece, a long Pastorale with the flavour of a hornpipe, and the most ingeniously contrived repeated patterns and variations in texture and mood, all over a D pedal.

Another feature pointing to Storace’s originality is the use of tonalities, especially bearing in mind how the instruments would have been tuned. The first three pieces ascend in thirds (A major, C minor, E minor), the next two feature one key and its relative minor (the Romanesca in C major and the Spagnoletta in A minor), and then come the Monica in G minor and the Ruggiero in G major. The most remarkable
juxtaposition is found in the two gems of the collection: the Passagagli fe fa ut per bi in F minor and the Ciaccona, composed in a luminous, lively C major.

To convey the varied colours and textures of Storace’s music for this new recording, Enrico Viccardi has chosen to play four different instruments: a harpsichord built as a copy of a Grimaldi, a spinet modelled on the Venetian instruments of the second half of the 17th century, a Neapolitan positive organ by F. Cimino with all original pipes (first half of the 18th century) and the historically significant organ at the Collegiate Church of Santa Maria della Neve at Gualtieri (RE).

· All that we know about Bernardo Storace (1637-1664) comes from the “Selva di varie compositioni d’intavolatura per cimbalo ed organo”, a remarkable collection of works compiled by the Chapel Master of the Messina Cathedral, and published in Venice in 1664 by an unknown printer.
· Far from being a bridge between Girolamo Frescobaldi and Bernardo Pasquini, as some have declared, Storace’s style speaks for a degree of originality that should earn him a place among the great composers of keyboard music of the baroque period in Europe.
· This new recording contains the complete keyboard works by Bernardo Storace, consisting of Toccatas, Capriccios, Passacaglias, Partitas and Ricercares, music of bold harmonic language and instrumental brilliance.
· Enrico Viccardi chose four different instruments for this recording. A harpsichord built as a copy of a Grimaldi, a spinet modelled on the Venetian instruments of the second half of the 17th century, a Neapolitan positive organ by F. Cimino with all original pipes (first half of the 18th century) and the organ at the Collegiate Church of Santa Maria della Neve at Gualtieri (RE), which was built by Agostino Traeri (1784, main wind-chest) with sound parts by Giovanni Cipri (16th century), Carlo Lanzi (1670) and Andrea Montesanti (1788).
· Enrico Viccardi is one of Italy’s foremost specialists in early keyboard music, he previously recorded the complete organ works by Tarquinio Merula for Brilliant Classics.
More Less