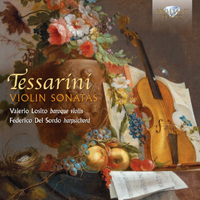 The 18th-century Italian Carlo Tessarini has only emerged relatively recently as the brilliant musician and composer that he was (thanks, in part, to an in-depth study published in 2012). He travelled widely, taking on diverse forms of work, and remaining musically active until a ripe old age – remembered by one of his contemporaries as a ‘lively 70-year-old who still regularly played the violin’.

We are treated here to an album consisting almost entirely of world premiere recordings. Within Tessarini’s exclusively instrumental oeuvre, he was in particular a prolific solo sonata writer. His works oscillated between virtuosity and accessibility – reflecting in part the commercial considerations attached to the publication of his work – though there is more than enough of the former here to excite the listener’s ear. Equally manifest are his subtle compositional innovations, such as the fluid approach to melodic counterpoint discernible in the Sonata in C major Op.2. The result is an album sure to convince listeners of the deeper attention that this skilful composer merits.

The sonatas are played by Valerio Losito, an esteemed violinist and viola d’amore player as well as a musicologist, whose first recording for Brilliant Classics was a Scarlatti album in 2011. The basso continuo is played by harpsichordist, professor and radio broadcaster Federico del Sordo.

Other information:
- Rarely recorded repertoire.
- Carlo Tessarini received his musical tuition in Venice, probably with Vivaldi and Corelli (whose musical heir he clearly is). He became a famous virtuoso on the violin, travelling Europe like a modern day pop star. He died in Amsterdam, leaving a substantial oeuvre mainly written for his own instrument.
- His violin sonatas are firmly rooted in the baroque tradition, but already pointing towards the “galante style” of the late 18th century, with an emphasis on belcanto melodies and cler and transparent structures.
- Valerio Losito is an eminent violinist and musicologist who already recorded a Scarlatti programme (BC 94242) and a superb recital for viola d’amore solo (BC 94367) for Brilliant Classics.
- Booklet includes liner notes and artist biographies.
More Less