Home > Catalogue > The Cello at the Montecassino Abbey

The Cello at the Montecassino Abbey 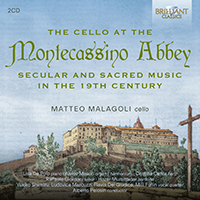 Rare manuscripts from the library of an Italian abbey, rediscovered and recorded for the first time.
Just off the main road between Rome and Naples, the Benedictine abbey at Monte Cassino can date its foundation back to AD529, though it gained a more tragic renown during the Second World War as the site of exceptionally heavy Allied bombing in order to break Nazi defensive lines. The abbey’s surviving library of manuscripts (theological, musical and others) was mostly moved to Rome during postwar reconstruction, but local archives mined for this release have turned up a treasure trove of pieces which testify to a lively culture of chamber music at the abbey during the 19th century.
Several of the brothers must have been dedicated cellists of considerable gifts to judge from the surviving scores. They include a collection of six cello duets by Valentino Bertoja (1757-after 1820), a composer from the Veneto region to the north; the Duet No 6 opens this collection. The two most prominent monk musicians featured here are Padre Placido Abela (1814-1876), originally from Siracusa in Sicily, and Padre Mauro Liberatore (1810-1879) from L’Aquila.
It is Liberatore who arranged both sacred and secular pieces to give a starring role to the cello, such as ‘Casta Diva’ from Bellini’s Norma, and a then-popular aria from Mercadante’s Il giuramento. Abela composed ‘Concerti armonici’ for a trio of piano, harmonium and cello, and then a part for the string instrument in the
liturgical inserts of his Missa solennis. Other composers wrote pieces specifically for Liberatore to play, such as the Barcarola by the Sicilian cellist and composer Domenico Laboccetta (1823-1896), and two composers local to Monte Cassino, Pietro Ray (1773-1857) and Domenico Corigliano (1770-1838).
This exceptionally rare repertoire is introduced in a booklet essay by the cellist Matteo Malagoli, who is the principal soloist on a collection of similar historical value from Brilliant Classics, of ‘Early Neapolitan Cello Music’ (96345) by Gerco and Francone.

· "Founded in 529 AD by Benedict of Nursia, the abbey is still considered the ancestral monastery of the Benedictine Order. In 744 the archabbey was granted independence; it ended in 1503 when the territorial abbey fell to the Kingdom of Naples or, from 1860, to the Kingdom of Sardinia. Since 1927 Montecassino Abbey has been part of the then newly formed province of Frosinone (Lazio). The abbey also gained sad notoriety during the Second World War, when it was completely destroyed in the Battle of Montecassino. From 1948 to 1956 the abbey was rebuilt according to the original plans".
· The instruments often used were piano, harmonium, flute, violin and cello. The cello however was the most important instrument, which is confirmed by the important solo cello scores and Methods stored in the local Archive, proof of the strong affection to this instrument.
· The cello literature includes both sacred and secular works. Sacred works came only from the 19th Century but secular music originated from the 17th century (Rocco Greco and Gaetano Francone) till the late 19th Century Neapolitan era. The preservation of the Archive was in the hands of Padre Mauro Liberatore from L’Aquila (1810-1879), cellist, flutist and music arranger and Padre Placido Abela from Syracuse (1814-1876), organist, pianist and composer.
· This fascinating set features cello music by Bertoja, Mercadante, Abela, Coop, Ray, Krug, Thalberg and others. The first CD presents secular chamber music, the second CD presents Sacred works, in instrumental settings.
· Played by Matteo Malagoli (cello), Alvise Mason (organ) and Lisa De Polo (piano), and other vocalists and instrumentalists.
More Less