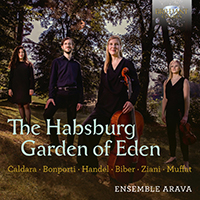 Vienna, Salzburg and Rome were among the principal centres of power for the Holy Roman Empire of the late 17th and early 18th centuries, and they accordingly attracted the most talented and ambitious composers of the day. The Venetian-born Caldara aspired to the post of Court Kapellmeister in Vienna, and composed the wedding music for Emperor Charles VI in 1708. He won huge success in Rome, where he followed in the footsteps of the young Handel, and eventually won the favour of the emperor himself, who even conducted some of Caldara’s operas.

Secular cantatas by the two composers therefore form the centrepieces of this unique recital. The vocal writing by Caldara, in Risoluto son già tiranno amore, and Handel’s Un’alma innamorata,emphasises the vocal brilliance of the singers in bravura coloratura with finely elaborated instrumental accompaniment. The ostensible theme of both cantatas is the standard trope of thwarted and unrequited love in a pastoral context, but mainly to represent imperial power.

Bonporti, Ziani, Biber and Muffat also won fame for the virtuosity as performers and composers in an Italiante style whether they came from north or south of the Alps. Bonporti’s Aria cromatica is as bold and innovative in its harmony as the violin sonatas of Biber and Muffat are in their extensions of violin technique. The featured work by the lesser-known Ziani is a setting of the Marian hymn Alma redemptoris mater, with closely interwoven parts for soprano and violin.

Based in Germany, the four young musicians of Ensemble Arava gathered together specifically to explore the rich Baroque heritage of music for soprano, violin and continuo. They named themselves after the Hebrew word for willow as well as wilderness, symbolising both untamed nature and the annual rejuvenation of spring. They have won prizes at several international early-music competitions: this release marks their debut album.

The Habsburg Empire was a unique melting pot of cultural currents at the end of the 17th and beginning of the 18th centuries. Similar to the French court, the emperors in Vienna sought to distinguish themselves through music. In contrast to Versailles, however, there had already been a strong affinity to Italian music here. Coupled with the influences from the Bohemian region and the many travel movements across the Alps, this led to a marked flourishing of musical life in eastern Central Europe.
This original concept program present works by Caldara, Bonporti, Händel, Biber, Ziani and Muffat, a mix of Cantatas on secular texts and instrumental sonatas, all bearing witness of the extraordinary high musical level of the period.
The Arava Ensemble (Arava is Hebrew for willow, but also of wilderness) consist of soprano, violin, cello and harpsichord, performing vocal and instrumental music in their concerts with creative explanations. They were awarded first prize as well as the audience award at the International Competition for Concert Explanation and Presentation in Frankfurt. They have performed at Resonanzen Festival in the Konzerthaus, Vienna and at the Innsbruck Festival of Early Music. They have been musical ambassadors for UNESCO City of Music, Hanover, Germany at the international Día de la Música in Seville, Spain.
More Less