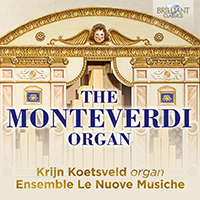 This recording features a very special newly built organ, showcasing it in the roles in which its predecessors were used in their heyday at the turn of the 16th century. This particular type of organ, small in scale and with open pipes all made of Italian cypress wood, was one of which perhaps the most important composer of his time, Claudio Monteverdi, was particularly fond, and yet it’s practically nonexistent today.

It was during Le Nuove Musiche’s great undertaking to record the complete cycle of Monteverdi’s Books of Madrigals that director Krijn Koetsveld began to feel the need for an organ capable of recreating the sound typical of that era. He explored possibilities for realizing such a project, and gradually the idea to reconstruct an organ befitting the Italian musical practice from around 1600 took shape. He approached the Netherlands’ Nationaal Muziekinstrumenten Fonds, and they embraced the idea, consulted organist Pieter van Dijk and awarded the organ building contract to Klop Orgelbouwers.

No original organs from Monteverdi’s time have survived, and very few illustrations exist. But it was possible to reconstruct his beloved organo di legno (wood organ) on the basis of contemporary accounts, which describe, in addition to the open, wooden pipes, hand-operated bellows, creating a much lower wind pressure than that of modern organs. From Monteverdi’s instructions in the organo di legno part of his Vespers, such instruments are also known to have had several stops.

This recording places this wonderful, new organ centre-stage, as a solo instrument in works by Frescobaldi, Froberger and Merula, but also as a continuo instrument in both sacred and secular vocal works selected from Monteverdi’s collection Selva morale e spirituale of 1641. In the latter, accompanimental role, one can hear first-hand why the soave sound of its wooden pipes was so prized for its ability to blend with the human voice, as was the nuanced wind supply hand-pumped by organ blowers on this recording, as it would have been in Monteverdi’s day.

This recording presents the newly built organ which aims to recreate the typical sound of the Monteverdi era. Unfortunately, no original organs from Monteverdi's time have survived and even hardly any pictures exist. The reconstruction is made on the basis of descriptions like those of Monteverdi. One of the leading principles is that these organs had open, wooden pipes, made of Italian cypress wood. The blowing action was done by hand, with a much lower wind pressure than in modern organs. The sound and the way the organ 'speaks' had to match the Italian music of the time and blend well with the voices and instruments. From the instructions of Monteverdi in the score of his Vespers, we know that he had several stops at his disposal, in order to create different colours.
The commission to build this new organ came from Krijn Koetsveld, who in the past year recorded all Monteverdi’s Madrigals for Brilliant Classics and who felt the need for the authentic sound of such an instrument. It was built by the respected firm of Klop Organ Builders.
Presented are organ works by Froberger, Merula, Frescobaldi and Monteverdi, as well as vocal works by Monteverdi in which the organ is featured.
Played by Krijn Koetsveld, organ, and sung by his vocal group Le Nuove Musiche.

Other information:
Recorded June & September 2020 in Hoogland (Utrecht), Netherlands
The bilingual booklet contains notes in Dutch and English about this programme and the featured specially commissioned, unique organ
The original sung texts with English translations are available with this release
More Less