Home > Catalogue > The Pied Piper of Hamelin and other Melodramas

The Pied Piper of Hamelin and other Melodramas 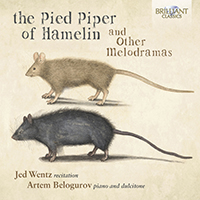 The melodrama, a genre combining recitation with music, flourished with particular vigour at the dawn of the 20th century. By that time, it had outgrown its original 18th-century form: no longer simply alternating between music and speech, late 19th-century melodramas (and their descendants) mainly consisted of texts declaimed over a nearly continuous and elaborate musical accompaniment.

To avoid being overwhelmed by the accompaniment and yet remain declamation as opposed to singing, the vocal part requires a particular style and great skill, as described by composer Stanley Hawley in an essay titled Recitation-music (1912): “Any colloquial quality of voice is undesirable, and is strongly to be condemned; something more than mere speaking is required for success. The natural conversational tones of the voice do not blend with the pianoforte, for a thin speaking voice has not sufficient body of its own to afford support to a musical accompaniment, and moreover, cannot impart strength of rhythm to the poem. […] The quality of the voice required is that golden mean between speaking and singing, which does not possess the monotony of a chant nor the affectation of what is best described as ‘sing-song’, but that sympathetic tone that can be coloured by the soul; for the tone expresses feeling, words define it.”
Wentz and Belogurov have taken Hawley’s advice to heart, searching out in the melodrama a dual art that merges words with music in the hope of revealing just how moving the genre can be, why it was so popular, and how it may be revived today.

A very special recording: 19-th century Melodramas for voice and piano!
The melodrama, a genre combining recitation with music, flourished with particular vigor as the 20th century dawned. By that time, it had outgrown its original 18th-century form: no longer simply alternating between music and speech, late 19th-century melodramas (and their descendants) mainly consisted of texts declaimed over a nearly continuous and elaborate musical accompaniment. The speaker used musical elements like pitch, timbre and rhythm to meld the words with the musical texture, taking care that they lost neither expression nor intelligibility in the process. The performance practice associated with the works recorded here paved the way for Schoenberg’s Pierrot Lunaire.
The composers included are Alexander Campbell Mackenzie, Margaret Amphlett, Harry Farjeon, York Bowen, and the authors include Thomas Hood, William Butler Yeats, John Keats and Edgar Allen Poe.
A unique concept realized by Jed Wentz, famous flutist and pioneer of the Historically Informed Performance Practice. His numerous recordings brought him excellent, 5-star reviews in the international press. He is seconded by Artem Belogurov, playing the fortepiano and dulcitone.

Other information:
Recorded in March of 2021 in Schiedam, Netherlands
Booklet contains notes on the works and the genre by the reciter (the renowned flutist and conductor Jed Wentz)
Artem Belogurov plays a Blüthner piano (Leipzig, 1865) and a dulcitone by Thomas Matchell & Sons (Glasgow c.1920)
More Less