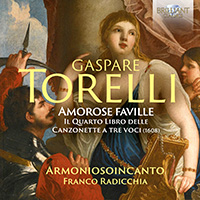 Gaspare Torelli (1572–c.1613) was born to a family of officials and intellectuals, and as a young man he embarked on a religious career in his home town of Sansepolcro, becoming a monsignor in 1602. He was a music teacher, composer and poet and, with a thorough knowledge of Latin, he also penned a treatise on Italian grammar.

The Amorose faville are the last in the series of extant musical works published by Torelli. The collection of 22 canzonettas dates from 1608, when it was published by Amadino of Venice. A single complete copy survives in the Kassel University Library, upon which Carolina Calabresi has based her modern edition published in Città di Castello in 2018.

The canzonetta genre emerged between the second half of the 16th and the first decades of the 17th centuries. These are short polyphonic compositions, the earliest of which were not very elaborate but which over the course of time began to take on some features typical of the madrigal, including a more refined compositional technique and the use of imitation and syllabic declamation. The subject matter also grew broader, with bucolic and pastoral themes in the style of Petrarch added to the original stock of amorous tales.

Also among the canzonetta composers was Claudio Monteverdi, who published his Canzonette a tre voci in 1584, at the age of 17. Torelli’s Amorose faville have a number of features in common with Monteverdi’s canzonettas including madrigal-like text painting. Here is the beginning of a style aimed at stirring the listener’s emotions and conveying musically the poetic imagery, an expressive urgency that would later lead Monteverdi to break the strict rules of traditional harmony and champion the theories of the revolutionary seconda prattica.

Recorded October & November 2019, January & February 2020 in Perugia, Italy
This recording uses Carolina Calabresi’s recent modern edition of the works
The booklet contains liner notes written by Calabresi, a biography of the ensemble, and the Italian texts of each canzonetta

Gaspare Torelli was born in Sansepolcro into a family of civil servants and intellectuals. From a young age he embarked on an ecclesiastical career in his home town. His many talents showed a great versatility: he was a music teacher, composer, poet and, thanks to his profound knowledge of Latin, he also wrote a treatise to teach Italian grammar. He was a member and Prince (with the academic names of Confidato and Impotente) of the Accademia degli Avveduti in Padua, the city to which he had moved.
The Amorose Faville is the 4th Book of Canzonettas by Torelli. Itconsists of 22 Canzonettas for three voices, the authors of which are never cited. Nevertheless, some of their names have been identified and Gaspare Torelli himself is one of those. As the title of the book already anticipates, the main themes of the Canzonettas are amorous themes. Pastoral scenes are also present with shepherds, singing birds and colorful fields. Two of the Canzonettas (nos. 20 and 21) are written in Venetian dialect and form a separate group within the collection, characterized by language and style. With this work Torelli expresses the cruel love, the amorous laments and the flares that burn within the lover.
Performed by the vocal ensemble Armoniosoincanto, conducted by Franco Radicchia, who already successfully recorded for Brilliant Classics the Laudario di Cortona, Masses by Couperin and the Canzonettas by Monteverdi.
More Less