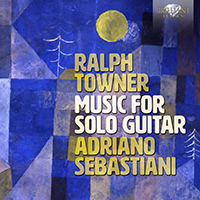 A musical name perhaps most closely associated in many minds with the band Oregon which he co-founded, Ralph Towner (b.1940) the classical composer is particularly beloved of guitarists and is a prolific writer for the instrument.

Having studied composition at Oregon University, Towner spent four years in Vienna studying classical guitar with the Czech teacher Karl Scheit. Having previously favoured the piano as a medium for his improvisational talent, Towner swung towards the classical and 12-string guitars. His very individual approach to the guitar and its tone-colour potential has been described as pianistic or even orchestral, with his renown as a performer on the guitar as high among classical musicians as in any other musical sphere. His solo recitals on the instrument have been primarily focused on his own numerous compositions, of which he has recorded over two hundred.

This record follows the short guitar solos – many of them linked to the group Oregon such as Hermia’s Galliard from the band’s 1998 incidental music for a production of A Midsummer Night’s Dream and When The Fire Burns Low originally for piano and recorded with Oregon in 1991 – with the Maddalena Variations (2011) a prelude and four variations. This larger-scale work exemplifies Towner’s return to the more traditional classical forms in which he was originally trained in the 60s.

- Ralph Towner was born in Chehalis, State of Washington on 1st March 1940, but grew up (from the age of five) in Oregon. Born into a musical family, he began to play the piano as a four-year-old. Having studied the trumpet, from the age of seven he began to play Dixieland and swing. Having studied composition at Oregon University, he graduated in 1963 and travelled to Vienna where he spent four years studying classical guitar with the Czech teacher Karl Scheit. Towner lived in New York from 1968-1982 and during this period he worked with some famous names, such as Stan Getz and Sonny Rollins. In the late 1960's he joined the Paul Winter Consort as guitarist and pianist, before becoming strongly influenced by the celebrated jazz pianist Bill Evans. His main instrument however became the classical and 12-string guitar. His very individual approach to the guitar and its tone-colour potential was described as pianistic or even orchestral. In 1970 he helped to form the group Oregon and during the following decade began to make recordings which proved to be very influential, utilising a musical style in which he assimilated elements of folk music, Indian classical forms and free improvisation influenced by avant-garde jazz. Ralph Towner is still a member of Oregon until today.
- This new recording presents Towner’s music for solo guitar, highly attractive works written in a very personal musical idiom, based on all current 20th century influences and inspirations.
- Played by Italian master guitarist Adriano Sebastiani, who already successfully recorded for Brilliant Classics in works by Casarini, Dowland, Spohr, Von Weber and Rossini.

Other information:
- Recorded in February 2021 in Piombino (Livorno), Italy
- Booklet contains an essay by musicologist Philip Borg-Wheeler and a note from the artist, Adriano Sebastiani, along with his biography
- Adriano Sebastiani plays a classical guitar by Alan Stuart Wilcox (1975)
More Less