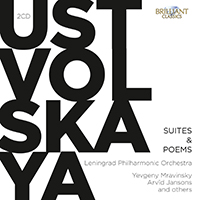 As well as being among the most gifted of Shostakovich’s pupils, Galina Ustvolskaya (1919-2006) is best known for composing music that unflinchingly confronts the big questions - death, God, loneliness – in an output of mostly instrumental pieces. Her language is spare, austere yet sized to contain the momentousness of her subjects.
It will therefore come as a surprise to many listeners that Ustvolskaya was no less capable than many of her Soviet-era contemporaries of turning her hand to much lighter and more functional music when it was required. In 1953 she produced a Young Pioneers’ Suite – opened and closed by a joyous trumpet fanfare – and two years later a Childrens’ Suite of pieces barely longer than a couple of minutes, encapsulating a game of tag, a toy ballerina, a walk in the woods. Four years after that, in 1959, Ustvolskaya produced the Sports’ Suite, perhaps emulating the example of Satie with a series of witty miniatures. These suites were all scored for orchestra and recorded for the state record label, Melodiya by the Leningrad Philharmonic under its two legendary chief conductors, Yevgeny Mravinsky and Arvids Jansons (father of Mariss). They receive their first digital transfers and release in Europe with this new Brilliant Classics album, which will be an essential acquisition for students of Soviet contemporary music.

Several recordings have never appeared in any format before such as the Poem on Peace from 1961 – not to be confused with her earlier instrumental poems which were later numbered. This was first performed at a prestigious concert including new music from Europe and the US, and numbering among its audience a delegation of American composers including Samuel Barber, who remarked after hearing Ustvolskaya’s Poem: ‘If that is peace, I prefer war.’ The piece was not performed again and her career as an ‘official’ composer producing music to order was over. Perhaps this is just as well for posterity, but the chance to hear her early voice should not be missed.

Galina Ustvolskaya’s entire life (17 June 1919 - 22 December 2006) is bound up with one and the same city. She was born in Petrograd (now St. Petersburg), and in 1939 entered Dmitri Shostakovich's composition class at the Conservatory as the only female student in his class. Shostakovich highly valued Ustvolskaya’s work and later said of her: "I am convinced that the music of G. I. Ustvolskaya will achieve worldwide renown, valued by all who perceive truth in music as paramount in importance”.
Like many other Soviet composers she was accused of Formalism and was forced by the authorities to write accessible music “for the People”. This unique 2CD set presents works from the fifties, that period of her life when she wrote in socialist realist style.
Theses historic recordings are published here for the first time, with the permission of the Ustvolskaya Estate, and performed by the legendary Leningrad Philharmonic Orchestra conducted by Yevgeny Mravinsky and Arvids Jansons.
A unique project, to coincide with the centenary of Ustvolskaya’s birth (1919), made possible by Alexei Lubimov, the Ustvolskaya Estate and the Ustvolskaya Archive.
More Less