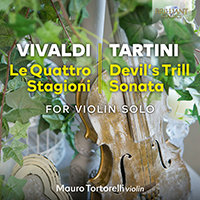 The Four Seasons as you’ve never heard them before, stripped back to their pure essence as an exhibition of the art of violin playing.

Both of these Baroque masterpieces have proved themselves perenially adaptable to any number of arrangements, for ensembles from string quartet to wind ensemble. However, Mauro Tortorelli has devised the genuinely novel concept of arranging them for solo violin. This entails playing not only the elaborate solo parts but filling in as much of the accompaniment – string orchestra in Vivaldi’s case, basso continuo for the ‘Devil’s Trill’ – as can be fitted on the four strings of a violin.
Tortorelli’s arrangement make goodscholarly sense in its concentration on the ‘art of the violin’ which stimulated so much composition for the instrument in 18th- century Italy. However, his performance, vibrant and imaginatively registered, makes vivid musical theatre on its own terms. The effect could be compared to a professional-standard busker, playing with familiar texts and bringing an improvisational fantasy to them.

Long established as one of Italy’s most distinguished teachers as well as performers, Mauro Tortorelli is presently professor of violin at the Gesualdo conservatoire in Potenza as well as an active chamber musician. He has assembled a critically acclaimed discography on Brilliant Classics, including albums of Saint-Saëns (94848), Milhaud (95449), Ševčík (96213), Scalero (96160) and Castelnuovo-Tedesco (96007).

Praise for Mauro Tortorelli:
‘Tortorelli is equally impressive on viola and on violin… On both instruments he spins a flawless, silky line with perfect intonation.’ (Fanfare, May 2017 – Milhaud)
‘This release is not just for violinists and lovers of violin music; it’s for everyone. Urgently recommended.’ (Fanfare, July 2021 – Scalero)
‘Sympathetic performance… employing many idiomatic (at least to the period) expressive devices.’ (Fanfare, May 2015 – Saint-Saëns)

A veritable tour de force: the arrangement of Vivaldi’s 4 Seasons and Tartini’s Devil’s Trill Sonata for violin solo!
Violinist and arranger Mauro Tortorelli about this unique project: “This recording is not only a challenge in terms of performance (playing both the solo part and the orchestral part at the same time), but also in terms of arrangement. Having to simulate all the orchestral timbres, the various voices in counterpoint, the sound contrasts on only four strings of the violin was not at all easy. Paganini's ingenious technique of double trills and left-handed pizzicati (used for the second movement of L’Inverno and the second movement of L’Estate), Bartok's pizzicato (for the rifle shots in the last movement of L’Autunno) and the formidable bow technique used by Henryk Szeryng, handed down to me by his pupil Georg Monch, have certainly suggested the best instrumental solutions to obtain the clearest possible clarity of execution between the various voices of a complex piece, enabling me to overcome the obstacles that the original scores presented me with. The decision to transcribe for solo violin these two famous works was also inspired by their great melodic power. In fact, every time I studied both pieces to perform them in public in the original formation, I had the feeling that they were already functional without accompaniment. As I am not a "Baroque" violinist, I preferred to perform the pieces with current technique and interpretation, respecting as much as possible the score revised by Gian Francesco Malipiero for Antonio Vivaldi's "Four Seasons" and the manuscript score of Giuseppe Tartini's "Devil's Trill", adding my own Cadenza. “
Mauro Tortorelli already successfully recorded for Brilliant Classics violin sonatas by Saint-Saëns, Scalero, Milhaud, Ševčik/Auer and Castelnuovo-Tedesco.
More Less