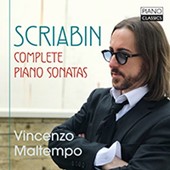 Vincenzo Maltempo has made some highly-praised recordings of Liszt and especially Alkan, so Scriabin’s esoteric world and pianistic demands should no terrors for him, except the sort that the music is designed to evoke. The emotional terrors in the First Sonata of 1892 are concerned with despair, for as Scriabin wrote “strong and mighty is he who has experienced despair and overcomes it”. That seems best to portray the heroic first movement, which Maltempo dispatches with conviction, but not too much big 19th century rhetoric. There is a rather bleak slow movement, but he finds such warmth as the music will yield. The Presto is at times rather measured despite that marking, thought the left-hand octaves make their mark alright. The funeral march finale is movingly done, not least the “Quasi niente” (‘nearly inaudibale’) chordal section. Despair does not sound overcome here, but the cycle is off to an excellent start, from composer and pianist.

The two-movement Second Sonata had a long gestation completed in 1897, and still inhabits the world of late Romanticism. The flickering half-lights of its opening is well captured – Scriabin said it “evoked the calm of a southern night on the coast” – and the development moves forward purposefully. The Presto second movement has an impressive energy, but Maltempo keeps everything clear, especially when a long melody is aspiring to be heard over the storm of notes below. These first two sonatas are often said to be reminiscent of Chopin, but this pianist make them sound already like Scriabin’s own individual encounter with the tropes of later music than that.

The ebb and flow of the Drammatico opening movement of Sonata No.3 (1897-8) holds the attention well, as Maltempo is so alert to its changes of direction within the main thrust of the music, driven forward by its pervasive dotted rhythm. The short Allegretto is deftly despatched and the dreaminess of the slow movement well caught. The finale’s marking is Presto con fuoco and it has fire aplenty, but the playing still communicates the main outlines of the argument with clarity. Thus concludes what is usually seen as the early phase of the cycle, though that might be just because these first three sonatas come from the 19th century. There could equally well be heard a continuous line of development in these works from Sonatas numbers One to Ten. Certainly Maltempo does not condescend to these first pieces, but plays them with as much devotion and skill as he does all the rest.

Having said that, the Fourth Sonata (1903) does seem to announce a new world. Its two movements fly by as one – they are linked and here last just 7:58 in total, exactly the speed of Hamelin in his fine cycle. I will spare you the programme involving a distant star, but Scriabin did also speak of music “on the verge of the possible…a flight at the speed of light, straight towards the sun”. And in a very good performance like Maltempo’s you can hear what he means, as the playing becomes pretty exciting in the headlong finale (Prestissimo volanda) with its ecstatic dancing rhythms. Chopin, and almost any other composer, is left far behind in such music, sometimes said to be Scriabin’s first incontrovertible masterpiece.

Sonata No.5 (1907), the first of the final sequence of single-movement works, is another very persuasive account of a tremendous piece – if you don’t like the fifth sonata then Scriabin might not be for you! Maltempo has the measure of both the languid passages and the impulsive ones, while convincing us that they belong together, so the contrasts never imperil integrity – an essential attribute in this composer. He can do only so much with the evanescent nature of Sonata No.6 (1911)– few artists can elucidate the elusive in this work, which Scriabin himself never played in public. But the Seventh of 1911-12 (the “White Mass” sonata) was a particular favourite. Maltempo’s version evokes the sacerdotal implications of the title, for as the music of these later sonatas increasingly leads us on high, so the pianist virtually becomes a high priest, serving the music’s extra-musical purposes. This implies a thinking musician as well as a fine technician, and Maltempo shows himself to be both in these late works.

The last three sonatas are increasingly visionary and esoteric, but Maltempo reveals their qualities as much as he did those of the earlier ones. This music explores elements of piano technique such as the specific colouring of chords and even the range of types of trill (which occur in abundance) even before an artist has worked out exactly what some of the evocative and poetic markings might imply, in their range from the frankly sensual to the all-embracingly spiritual. Beyond technique, and Maltempo has a very impressive command of the keyboard, there is the matter of temperament, of an emotional response to what Scriabin has to say. To play the later Scriabin is to enter a world where few if any other composers lead us (though some things of Messiaen’s do maybe). Vincenzo Maltempo seems to me an expert guide.

There are several fine rivals in the full cycle dating back to Ashkenazy at least, but among modern ones with comparably fine piano sound and similar bargain pricing, it is Peter Donohoe on Somm who comes closest to this. Dmitri Alexeev on Brilliant is very good too, if a little cautious at times by comparison, with almost every movement taking longer than Maltempo needs. The benchmark survey of Hamelin on Hyperion is full-price but his pair of CDs adds the two most sonata-like other works of Scriabin, the important Fantasie Op.28 of 1900, and the Sonata-fantasie (op. posth.) of 1886. The Hyperion booklet notes are much the best of any, and in French and German as well as English. But Maltempo is in the same class musically, and is very well worth exploring. There is a helpful English-only booklet, containing a few unimportant misprints, and a suitably Satanic-looking photograph of the pianist. Plenty of diablerie in the playing too.