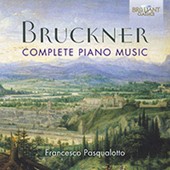 Only nine of the 31 movements on this disc last two minutes or more, and none of them date from later than 1868. In other words, these pieces are almost wholly unrepresentative of Bruckner, the Romantic master of colossal symphonies and Mass settings, although there is no doubting their charm and dainty craftsmanship. But even great composers need to let their hair down.

More than half of the pieces come from the Kitzler-Studienbuch (1861-1863), a notebook in which Bruckner compiled a series of studies in different compositional forms, honing the techniques that he would use in larger-scale compositions. Rather like the clutch of keyboard works which Wagner left, the impression all the pieces on this disc make is of a collection of offcuts; such pieces are committed to paper on two staves for their innate musical interest more than as an idiomatic or significant contributions to the piano literature. They are not even perfectly formed miniatures which stand as minor masterpieces, such as Beethoven’s Bagatelles or Chopin’s Preludes. In style, they often hark back either to the melodic lyricism of Schubert – as in Steiermärker with its striking flatwards modulation to B flat major for its contrasting middle section from G major, the expressive, songful 6/8 meter of the Klavierstück in E flat major, as well as the wild, virtuosic passages of the single-movement Sonata in G minor like the Wanderer Fantasy. Others make one think of the more meandering, descriptive Romanticism of Schumann in the four Fantasias.

Francesco Pasqualotto plays this varied sequence with considerable enthusiasm and abandon, even if perhaps that becomes more dutiful and predictable at times. Certainly the breathless haste of his execution of the four Quadrilles captures their excitement; the Marcia in D minor is appropriately sturdy; and the Tema e Variazioni are jaunty. But elsewhere his performances seem merely impetuous, impatient or unremitting. For example, after the wild exposition of the Sonata, the triplet figure of the coda is rather too hammered out where it could merely ripple more gently, and the chords in the left hand crash less, though the recapitulation is less beset by this problem. The two Andantes could be more subtly shaded and phrased, as could the independent Fantasia in G major, which opens with a long-breathed melody that could be a first thought for the principal subject of a symphony, like that which opens the Seventh.

In fairness, the tendency towards a plodding articulation is not entirely Pasqualotto’s fault, as he seems to play a piano that is contemporary with the music – perhaps a Bösendorfer, though the accompanying notes fail to provide any details. The instrument cannot produce ideally crisp and clean tones. The confined sound of the recording does not help either, even if that is deliberately contrived to recreate the domestic context in which this music would have been heard originally. Nevertheless, Pasqualotto manages to coax some opalescent sonorities for the second of the four Fantasias. He also successfully creates such richer colours and paces the music better in the two most memorable compositions here, the Stille Betrachtung an einem Herbstabend (Silent reflection on an autumn evening) and Erinnerung (Memory). In particular, the latter contains a luminous sequence of harmonies in ascent towards its climax that is akin to many passages in the Symphonies. The Mazurka in A minor is played with a suitable introspection, and rubato is applied so that the spirit of Chopin hovers close by.

To those who love Bruckner’s music, this disc is surely indispensable in bringing together an obscure and intriguing part of his output. But apart from the small handful of gems here, it is unlikely that many others will find much of interest in this disc, even if that is hardly Pasqualotto’s fault, though his advocacy of them could be more exacting. He features a more comprehensive programme than Fumiko Shiraga in her survey on BIS (review), but Ana-Marija Markovina on Hänssler Classics plays more expressively on a concert grand.