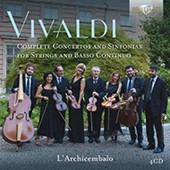 The old canard that Vivaldi wrote the same piece of music however many, nearly countless, times is given particularly specious truth in the case of his purely instrumental Concertos and Sinfonias. In the way that his compositions are set out in the now standard catalogue by Peter Ryom, in which works are listed by genre, rather than chronologically, they occupy a continuous series of entries from numbers 109 to 169. Hardly any of them have any soubriquets to distinguish them - it is perhaps partly on account of the appellation 'Alla rustica' that RV151 has attained a greater degree of celebrity than virtually all its counterparts – and their uniform scoring for string orchestra alone means that they lack the eye-catching feature of any solo instruments. On the surface, then, they appear to comprise a dauntingly monolithic, unvaried block of compositions.

Actual experience of these compositions - as with so much of the rest of Vivaldi's output – gives the lie to that lazy verdict, revealing an entirely different and rewarding reality. As with Scarlatti's sonatas or Haydn's symphonies, it is by virtue of the regular formal structure of these compositions that Vivaldi's inventiveness is shown in the way that he fills the basic framework with so much variety. In fact, even before listening to the music itself, a distinction can be drawn between the majority of these works called 'Concerto' and the smaller number of items designated 'Sinfonia' – the former comprising a genre in which Vivaldi is more likely to experiment with character and texture, not least in the sizeable number of fugal movements to be encountered; and the latter tending to denote a more generically rousing call to attention in a work which was likely to serve as the overture to an opera. RV111, for example, serves as the opening Sinfonia for his opera Giustino – not actually included on this recording, on which more later – but otherwise it is generally not possible now to identify which Sinfonias were used for which operas.

The typically Vivaldian hyperactivity of many of these compositions is met with performances by L'Archicembalo of corresponding vitality, especially in such boisterous first movements as those of RV 110 (recognisably similar material as the finale of the Double Trumpet Concerto), RV131, or RV146 with its dazzling, striding semiquavers across three octaves. They tend to play the themes robustly, almost detached, but leaving room – for the violinists in particular – to vary the articulation to more expressive effect by slurring segments of melody or emphasising some rhythmic idiosyncrasy, such as the hemiolas of RV143's finale; the dotted figures of the Corellian first movement of RV153; or the lilt of RV159’s opening.

Within the overall consistency of their interpretations, L'Archicembalo are very alert in bringing out effects, for instance the ostinato figure of the cello in the second movement of RV128 is thrown off the strings like a ricochet; the scurrying little shake figure, usually in the violins, of RV153's finale provides little skittish points of contrast with its otherwise relentless gigue rhythm; or the fanfare-like brightness of RV167’s opening figures. An improvisation on the harpsichord from the half-cadence end of RV112’s first movement to the minor key second movement (after an odd, audible break in the recording), and that instrument’s playing along with the strings’ fugal entries in the finale of RV120 might be taking liberties too far for some, however.

Antiphonal effects – one of Vivaldi’s most celebrated traits – come out clearly, usually between the two violin parts, such as in RV115, 158, and 162. The frenetic exchanges of the exhilarating rollercoaster ride that is RV118’s first movement sway back and forth like a very unsettled sea, but are also played in a tense, spindly manner.

Bass lines often pound in the middle distance of a fairly resonant and bright acoustic to provide irresistible motion to these performances. This is particularly notable in the solid underpinning of another remorseless gigue meter in the finale of RV109, though the violone could resound more to give a greater emphatic grounding to the insouciantly elegant finale of RV114 which, as a chaconne, should be expected to draw attention to its characteristic ostinato feature after all. Contrariwise the bass instruments thud too heavily against the comparatively delicate antiphonal exchanges and suspensions of the two violins in the bright A major first movement of RV160, plus the dotted rhythms of its second movement, are threatening.

These one-to-a-part performances remain lithe, but sometimes any lapse in intonation or sparseness of string tone is cruelly exposed, and in those handful of instances where Vivaldi calls for a solo performer to play as against a more numerous ensemble, that contrast cannot be realised. Occasionally a bigger sound would be welcome, if only for the sake of contrast, for example in the open octaves in the ‘Conca’ concerto – imitating the conch shell used like a foghorn to ward off rain, according to local folk belief – could be more piercing. But in fairness it rarely sounds as though there are only six performers playing (five strings and one harpsichord) as they bring out a generally full and robust texture in works that are, quite properly, bold public statements, rather than the more intimate dialogues of the chamber concertos (RV87 to RV108), which reverse the scoring by comprising several soloists without orchestra. Furthermore L'Archicembalo are able to draw back in the slow movements, such as with the metallic iciness of RV113's Grave; the wan sequence of extraordinary chords for RV121's Adagio; or the silvery timbre of RV161, though the siciliano of RV122 could be richer in tone if not louder. The fairly dense, chromatic texture of RV155’s slow first movement prefacing the usual three, benefits from a luminous, lean tone.

Even so, dynamic contrast could be more sharply observed to create more variety and interest such as in the repeated dotted phrases of the French inspired first movement of RV114; or indeed in such movements where Vivaldi does not vary the texture across their whole course. So, effective use of dynamics would create more drama – RV142’s opening movement shows that L’Archicembalo are aware of these possibilities – and the ‘Madrigalesco’ Concerto could be characterised more vividly with more gradations of colour and shade in its imitation of vocal polyphony.

In these otherwise bright recordings, in open and sufficiently resonant spaces, the viola is not always as audible as the other instruments. It seems a pity in some passages where it takes on some interest, such as some arpeggio quavers in RV143’s slow movement, or its lapping semiquavers in the remarkable equivalent of RV167 where each instrument in the scoring is given a different rhythmic motif to play repetitively against the others.

Each piece here is like an invigorating shot of espresso and, accordingly, one probably does not want to overdose on them over too short a period of time, although it is true that they are addictive. But as a comprehensive compilation it is not meant to be devoured in huge chunks. Wisely this set does not present the Concertos in the exact numerical sequence of their catalogue numbers – since Ryom ordered each genre of Vivaldi's works by key and rising through the scale, in the absence of much guidance as to their chronological order, this would present sizeable series of consecutive works in the same key, making for wearing listening. Instead, the order is mixed up across the four discs, though still rising by tone, so that there is more variety in tonality, and consequently each single disc could be taken as a self-contained recital in its own right (see track listing below).

Despite the title of this release, it is not an absolutely complete set in terms of the Ryom catalogue and the omissions are not explained or even consistent. RV132, 144, and 148 are now regarded as spurious and relegated to the Appendix in the catalogue, but so has 116 and yet that is included in the set. RV125 is incomplete and considered probably inauthentic. Although RV111 could understandably be excluded as the Sinfonia for Giustino (but RV111a might usefully have been included for its variant second movement) and RV117 as that for the serenata La Senna Festeggiante (albeit with a different slow movement), RV146 makes it on to this recording even though it is thought to have belonged to a now lost opera. RV130 and RV169 are idiomatic sepolcri Sinfonias, seemingly belonging to a type of oratorio composed for Holy Week, like Mozart’s later Grabmusik, recounting Biblical-inspired dramas at the tomb of Jesus, although it is not known if Vivaldi actually wrote any such oratorios himself. As particularly intense compositions it is a pity not to have them here, although they have been recorded frequently, and are worth investigating. That leaves RV117, 139, and 165 also inexplicably unaccounted for. Even apart from the regrettable absence of the latter three, the pedant or the completist might well wish that the inauthentic pieces were included in order to compare them with the composer’s real work and try to discern why they might once have been considered a part of the Vivaldi canon.

Vivaldians will have their favourite selections of this body of compositions from among the existing discography, and naturally such compilations will complement this almost full set. I Musici and I Solisti Veneti present more old school, full-bodied accounts – few others ratchet up the tension and create such a sense of a serious, implacable drive in minor key works as those feverish first movements of RV118 or RV152 for example, and who never rush through a movement as tends to be the norm now. Brilliant Classic’s own Vivaldi box set offers an extensive, though not complete, selection across three discs by the Budapest Strings from the early 1990s and also provides a more classic, stately approach to performance, on modern instruments. L’Archicembalo’s historically informed style should be seen, therefore as creatively contrasting with such traditional readings rather than supplanting them.

Closer competition is with the three volumes of these works recorded by Concerto Italiano and Rinaldo Alessandrini as part of Naïve’s ongoing Vivaldi edition (here, here, and here) who are only a little more numerous as an ensemble. They attain consistently stylish and comparatively more elegant readings which are often a degree more satisfying. But in other respects L’Archicembalo achieve more bite and zest, and as Naïve only feature those works to be found in Vivaldi’s own library of scores now held in Turin, their survey will not be as complete. A personal favourite is the single disc programme by the Venice Baroque Orchestra under Andrea Marcon, who are a larger band still, but set down some very lively and theatrical takes on these works, though some may find that a touch eccentric for regular listening.

Whatever shortcomings there are in Brilliant’s new release, which are few, this is surely an indispensable set for Vivaldians in that it brings together the fullest compilation yet of these works. For others who are unfamiliar with this repertoire, it is a treasure trove of irresistible, life-enhancing music, as good and convenient a place as any to discover these underrated compositions.