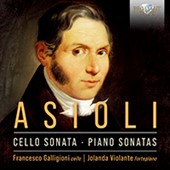 The fortunes of Bonifazio Asiola very much mirror the rise and fall of the Napoleonic Kingdom of Italy – in 1807 at the age of 38 he is appointed director of the Milan Conservatory by the French Viceroy only to be forced into early retirement by the fall of Napoleon in 1814, although he continued to teach and compose until his death in 1832. Labelled a ‘Sonata per Clavicembalo e Violoncello Obbligato’, Asioli’s Cello Sonata is very much in the new idiom where the cello usually takes the melodic initiative while the piano tends to accompany, although the demanding keyboard part is also allowed to sparkle. This is a substantial work with wonderfully idiomatic writing for the cello – it was after all in Italy that the cello had originally emerged from its traditional continuo role to become a solo instrument. This work was composed in 1784 as a Divertimento for cello and piano, although by 1817 when it was published it had acquired a name more befitting its substantial nature.

We also hear two of Asioli’s three Piano Sonatas op 8, published around 1790, works of considerable musical variety and charm. They are given powerful and expressive renditions by Jolanda Violante on a copy of a bright and incisive Walter & Son fortepiano of 1805, while Francesco Galligioni plays wonderfully eloquently on a late 17th-century Cremonese cello. The excellent programme note by Licia Sirch mentions in passing a wealth of other work by Bonifazio Asioli, and on the basis of these three attractive sonatas, he is a name we should watch out for. But for the vagaries of history, he would probably be much more generally appreciated.