Baroque Concerti from The Netherlands 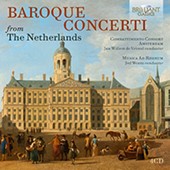 Every now and then Brilliant Classics reissue music from another label’s back catalogue, and come up with some real gems. This release is such a find, lifted from the archive of the Dutch label NM Classics. The first three discs are each dedicated to one composer: Pieter Hellendaal, Count Unico Wilhelm van Wassenaer and Willem de Fesch. The fourth disc brings another work by Fesch and pieces by Johannes Albertus Groneman, Conrad Friedrich Hurlebusch, Johann Christian Schickhardt and Anton Wilhelm Solnitz. While one rarely hears those names, the music is all delightfully tuneful and engaging.

Rather like England after Purcell, the Netherlands have been seen as a musical backwater. After Jan Pieterszoon Sweelinck – described as the father of the German keyboard tradition – some three hundred years bring us to Alphons Diepenbrock. But just like England was not “a land without music”, there was much interesting Dutch music to be heard in that period. To quote the booklet notes: “But does this really mean that between Sweelinck and Diepenbrock nothing happened? Of course not. The only thing that changed was that Dutch composers turned from being leaders to followers.” Yes, one hear the influence of other composers, and on the odd occasion works or movements have been clearly lifted and tweaked from others. Even so, it is entertaining and enjoyable.

The first disc, originally released as NM92019, presents Pieter Hellendaal’s Six Grand Concertos for Violins etc. in Eight Parts Opus 3. He may be the most original-sounding of the composers presented here. (Well, my wife asked if it was ‘Sheep may safely graze’. I had not got the connection.) Hellendaal tweaks the four-movement sonata da chiesa structure by adding a fifth movement. In effect, these concerti grossi align with those of Handel, are entertaining and come across very well in this recording.

Disc 2 presents the Sei Concerti Armonici by Unico Wilhelm van Wassenaer, first issued as NM92030. Despite a degree of originality, the works are indebted to others, especially the Italian violin school. This Northern-European music with an Italianate feel has exciting passages that add to the overall attractiveness of this disc.

The ensemble on the two discs is the Combattimento Consort Amsterdam. They play modern instruments in a historically-informed manner, giving them a light and airy, even sprightly feel. Jan Willem de Vriend conducts a spirited yet controlled performance.

Willem de Fesch may be the best-known of the composers represented in this set. His VI Concerti Opera Quinta were originally released as NM92054. This is the most varied of the single-composer discs: two concertos for two flutes, two violin concertos and two flute concertos which the booklet notes describe as “crowning achievement of […] Fesch’s High Baroque period in Amsterdam”. The Italian school again is a dominant influence; Corelli is never too far away, although I also hear a lot of Vivaldi, especially in the concertos for two flutes.

In concertos No. 1-2, Fesch plays around with structure, adding dance movements. The first has a Giga fourth movement; the second has a beautiful Arioso and a Tempo di Gavotta. The solo violinist Manfredo Kraemer is excellent as usual, and the support of Norbert Kunst’s bassoon deserves a special mention.

The composers represented on the fourth disc, first issued as NM92037, were musical immigrants from Germany, except Fesch, whose Concerto for two violins, Strings and Continuo is of a piece with his style explored on the previous disc.

Johann Christian Schickhardt was a composer, professional flute and oboe player, who settled in Leiden in the 1740s where he enrolled as a student at the University. Later he was described as "a master of musical arts and a member of the Academy", and he remained in Leiden. It is no wonder that his concerto features both his instruments; the six movements reflect the influences he had picked up on his travels.

Anton Wilhelm Solnitz was a German-Czech composer of whom little is known. A well-travelled composer and musician, he has applied to Leiden University for a position as a musician. His Sinfonia is typical of the North-German style, with the traditional fast-slow-fast movements.

Johannes Albertus Groneman enrolled in 1732 as a music student at Leiden, where he married a local girl. After his studies he settled in Den Haag, and made his name as a virtuoso violinist and composer. His works are influenced by the galante style. The Concerto in G Major for flute, two violins and continuo has apparently been one of the most difficult flute concertos of the eighteenth century.

Conrad Friedrich Hurlebusch travelled around Europe as a jobbing organist and harpsichord player. He met Bach, who promoted his music, and from 1743 to 1765 he was the organist at the Oude Kerk in Amsterdam. His Concerto in A Minor for solo violin, two oboes, strings and continuo is a hybrid between the solo concerto and the concerto grosso. The solo violin is pitted against the wind ensemble, which makes it an interesting and enjoyable work, especially in the slow central Adagio.

The performance of Musica ad Rhenum directed by the flautist Jed Wentz is excellent. The wooden flutes sound mellifluent, and the strings blend particularly well with basso continuo. On all four discs,the recording is clear yet warm. The booklet notes, unusually for Brilliant releases, are quite comprehensive. Fourteen pages in English and in Dutch give insights into this era of Dutch music. This is a set to savour, and a real bargain.