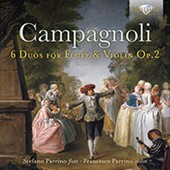 Ever since I first encountered his music, I have felt a strange attraction to Bartolomeo Campagnoli; initially, for no better reason that he was born in Cento, a town in Italy some 20 miles north of Bologna. I have always been fascinated by a baroque painter born in that town and usually referred to as ‘[Il] Guercino’ (the small cross-eyed man), though his birth name was Giovanni Francesco Barbieri (1591-1666). Some years ago, when staying in Bologna for a week, I decided to get the bus to Cento, because I remembered reading somewhere that there was a “small gallery” in the town, with a few paintings by Guercino. I arrived in Cento about 9:30. It was a Sunday, so the opening hours of the Pinacoteca Civica were 10:00-12:30. I was standing outside the gallery by 9:50, but for some time there was no sign of life. Then, about 10:15 a diminutive old lady came up the street with a bunch of keys, unlocked the doors and ushered me in ahead of her. She seemed astonished to see anyone, but was very friendly. The ‘small’ gallery turned out to have some 8-10 rooms (I cannot remember all the details now), some of them quite large. There were a lot of paintings by Guercino and a marvellous altarpiece, The Holy Family with Saint Francis by Ludovico Carracci painted in 1591. (I have learned since that Guercino admired this painting very much.) I wandered around for some two hours, seeing absolutely no one, neither a fellow visitor nor anyone from the gallery’s staff. I realised that the gallery was due to close in about 15 minutes, so I though I would better be leaving. I made my way back downstairs to the front door, only to find no one around and the door locked again, although the time was only 12:15. I found a note on the desk by the door which told me that there was a key in a specific drawer and asked me to lock the door behind me and post the key back through the letterbox. Having followed these instructions, I spent some two or three more hours wandering around the very attractive town, getting myself some lunch and a couple of coffees, and wondering how many alarms I would have set off if I had tried to bring a small painting out with me! All the locals were exceptionally friendly and welcoming, even by Italian standards. The experience was so strange and memorable that ever since I have looked out for the name of Cento. For such a small town, it produced, over the years, a number of significant people, including other painters and musicians and, astonishingly, the grandfather of the Victorian prime Minister Benjamin Disraeli! The entry on Cento in Wikipedia has a short list of such significant locals (including Campagnoli).

Campagnoli began the study of the violin – he was always to remain primarily a violinist-teacher, and only secondarily a composer – locally and then in Bologna with Alberto dall’Occa (a former student of Antonio Lolli) and in Modena with Don Paolo Guastarobba (who had studied with Giuseppe Tartini). Still in his teens, Campagnoli was in Padua for a period, a student at the school which Tartini had established there in 1727. In his twenties, he played in important orchestras in Florence, where he also studied with Pietro Nardini, and in Rome. From around 1775, he began to work as a soloist, first in the Italian states and then in Northern Europe. In 1797 he became musical director at the court of the Duke of Kerland in Dresden. He based himself in that city for almost 20 years, and wrote the violin manuals which for a long time were far better known than his music. He retired in 1818, and first moved to Hannover in 1820 (to live with his two daughters), and then went with them in 1826 to Neustrelitz, south of Berlin, where he died.

The generally very helpful booklet essay by Nicola Cattò does not give an exact date for the composition of these Duos, observing that they were “published by J. J. Hummel in Berlin in the first years of the 19th century … but dating back to the period between … 1780 and 1796”.

It is necessary to understand something of the aesthetic within which Campagnoli worked if one is to make a fair estimate of his music. He clearly shared that distrust of the virtuosic exhibitions of Paganini that one associates with Nardini (with whom, as noted, Campagnoli studied). Aptly enough, Nicola Cattò quotes in his booklet essay from Campagnoli’s Metodo della meccanica progressive per suonare il violin, written in 1807 and revised in 1824, in which he declares that “nothing is more beautiful and moving than simplicity”.

Essentially, Campagnoli’s music can be seen as belonging to what has increasingly come to be called (even if it is hard to define very precisely!) the ‘galant style’ – often seen as characteristic of the period between, as it were, the Baroque and the Classical, both in music and the other arts. In terms of music, two modern books are central to an understanding of the ‘galant’ style: Daniel Heartz’s Music in European Capitals: The Galant Style, 1720-1780 (2003) and Robert Gjerdingen’s Music in the Galant Style (2007). In some respects, the galant style is easier to ‘define’ in negatives than in positives: it is not a music of intense feeling nor a music of complex formal sophistication; it pursues clarity rather than the demandingly complex counterpoint of much baroque music; it reflects a polite society and values charm, grace and elegance; it puts a positive value on simplicity and does not require pyrotechnics of its performers; it puts more emphasis on melody than on complex harmonies. One literary scholar, Alan Menhennet, in a discussion of the German poet Christian Höllman (Modern Language Review, 66(2), 1971, p.345) writes, very aptly, that “the galant style aims at moderation in all things”.

Short of digesting the considerable length and complexity of the books by Heartz and Gjerdingen, a good way of grasping the essential nature of the ‘galant style’ is to listen to some of the works of, say, Leonardo Vinci, Giuseppe Sammartini and Johann Christian Bach. Or, indeed, of Bartolomeo Campagnoli. The fact that Campagnoli was a less significant composer than those three serves to make him, in some respects, a better exemplar of the style.

All but the first of these six duos are in three movements. In most cases, the first is in sonata form, the second is generally a slow movement and the third usually a Rondo. As Cattò observes, any “melancholic reference” is very brief. The roles of the two instruments are, for the most part, clearly defined and unvaried, the flute carries the chief melodic line, and the violin largely accompanies the flute. There are no virtuosic pyrotechnics, no showy display. In short, the music rarely surprises and never shocks or challenges. It fulfils the listener’s expectations, and does so with a good deal of charm. Without either challenge or profundity of emotion, this is hardly ‘great’ music. But it is music which could, and still can, be listened to with interest and pleasure.

Take the Third Duet, for example. The opening allegro is energetic and comes as close to requiring virtuoso playing as Campagnoli ever does; more characteristic of the composer is the beautiful Siciliana which follows, a movement which illustrates to perfection the way in which Campagnoli uses the flute as the primary melodic voice, harmonically supported by the violin. What he designates a Polonoise [sic], closes the work – not much over 13 minutes long – a dance in triple metre, with a Trio in which the violin imitates the flute’s melody at a lower pitch. So, nothing too complicated, but enough invention to engage an attentive listener. The ‘galant style’ presupposed a musically educated listener, without expecting that listener to be enormously sophisticated.

The Fifth and Sixth Duos perhaps push the boundaries just a little further. In the opening allegro of the Fifth, the flute and violin take turns to expound the main theme; the ensuing ‘Minuetto un poco adagio’ is constructed with more echoes of he baroque than one usually hears in Campagnoli, while the third movement, a Rondo Allegro, has an almost gipsy quality to it. The Sixth does not open with an allegro but with an ‘Andante con variazioni’, in which a theme in C major is followed by six variations, mostly limited to changes of the original melody and brief diversions into the minor – without any exploitation of the possibilities for grief or ‘tragedy’ in such a change of key. The closing movement is another Rondò with, again, a switch to the minor.

There is, in short, enough going on for one kind of listener to be kept interested and engaged, but not so much as to put off or confuse another, less demanding, kind of listener.

Though I would not make any great claims for this music, I find it pleasant and charming. My pleasure is enhanced by the quality of the committed performance by Stefano and Francesco Parrino. Though the brief biographies of the two musicians nowhere say that they are brothers, such an assumption seems to be confirmed by the photograph on the back cover of the CD booklet, where they certainly look unmistakably like brothers! The sound quality of the recording gives no cause for complaint. The instruments are adequately but not excessively distanced in the sound-picture.