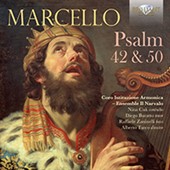 The name of Benedetto Marcello doesn't appear all that often on concert programmes. He is almost completely overshadowed by his contemporary and compatriot Antonio Vivaldi. There was a time that it was the other way around. In 1841, when Vivaldi's music had long sunk into oblivion, a complete edition of Marcello's collection of 50 Psalm settings, with the title Estro poetico armonico, was published in Paris. In that edition the basso continuo part had been replaced by a piano accompaniment. It was a token of the great admiration for these compositions which lasted from the years of the original publication (1724-1726) until well into the 19th century.

Benedetto Marcello was born into an aristocratic family, his father being both a violinist and a politician; he was a senator in the Venetian government. His mother was an artist and a poet. It is perhaps under her influence that Benedetto valued the poetic use of words very highly. Like his father, Benedetto was active in public life, as a lawyer and administrator. His aristocratic roots prevented him from being active as a professional musician and composer, and he presented himself as a nobile dilettante. It seems there was a strong rivalry between Benedetto and his older brother Alessandro, who has become best known for his oboe concerto. According to one story Alessandro didn't think very highly of his brother's musical skills. The success of the latter's collection of Psalms proved him wrong.

The name of the collection is interesting as this was also the title of a collection of concertos by Vivaldi which he had published as his Op 3 in Amsterdam in 1711. It has been suggested that Marcello's title could have been intended as a taunt in Vivaldi's direction. It may have been his way of indicating what he thought was lacking in Vivaldi's music: poetry. Marcello himself was praised for "strength and regularity of design", and "noble simplicity". This simplicity was a feature associated with 'early music', meaning the music of the 16th and early 17th centuries, in which Marcello was strongly interested. In a way one can see him as an early representative of what would become the standard in the time of Giuseppe Tartini, who was also very critical of Vivaldi's music, especially his compositions for his own instrument, the violin. Marcello's criticism was particularly directed towards the music for the stage. In 1720 he published a treatise under the title Il teatro alla moda, in which he dealt with the bad habits prevalent in the theatre at the time. He wanted to reform the style of singing and clear away exaggerated ornamentation.

This preference for naturalness comes clearly to the fore in his Estro poetico armonico and explains why these Psalms remained popular throughout the 18th century and beyond. They were performed across Europe, often in translations, including English, French, Swedish and Russian. They are made up of sections of a kind we also know from opera, such as arias and recitatives, but the arias are rather short and dacapo sections are omitted altogether. Marcello did not choose to set the Latin texts of the Vulgata, the then common translation of the Bible. He rather preferred versifications in the vernacular by the poet Girolamo Ascanio Giustiniani who, like Marcello, was from Venice.

Most of the Psalms are scored for solo voice(s) and basso continuo. Alberto Turco has selected two Psalms of different complexion. Psalm XLII, Dal tribunal augusto, is for bass and basso continuo, and is based on Psalm 42 (43), known with its Latin title as Judica me Deus. The text is divided into four sections, which all have the character of arias. They include quite some coloratura and the singer needs to have a wide tessitura.

The largest work is Psalm L (O d'immensa pietà), one of the seven penitential psalms, known under the Latin title Miserere mei Deus. It is one of the two Psalms whose scoring includes two instrumental parts (the other one is XXI). These parts have the indication violette. It is not entirely clear which instruments Marcello had in mind. Guido Balestraci, who recorded four of the Psalms (Arcana, 2017), considers viole da gamba the most obvious option. It seems that Marcello valued the viola da gamba, as he composed six sonatas for two cellos or two viols, which is rather unusual for a composer from Italy, where this instrument had become almost completely obsolete. His interest in early music may well have to do with this. Alberto Turco decided to use violas here. It is probably impossible to decide who is right. It is a mystery why in versetto 4 it was decided to add percussion. That seems entirely inappropriate.

Another matter is the vocal line-up. Psalm L is scored for three voices: alto, tenor and bass. This suggests a performance by three soloists. However, the score (available at the Petrucci Music Library) includes indications solo and tutti, which suggests the participation of a choir or at least some ripienists. As these pieces are settings of paraphrases of the Psalms in the Old Testament, and written in the vernacular, they were not suitable for liturgical use. Marcello performed them for the first time in Venice, in a building known as the Cavallerizza. Federico Del Sordo, in his liner-notes, writes: "Marcello recommended having a sufficient number of voices for the tutti parts: '(...) it would be reasonable to multiply (with due proportion in their distribution) the voices; in the first place because there should always be a full Chorus in exalting divine greatness'." The question, then, is what a 'full Chorus' means. Turco decided to add seven ripienists (AATTTBB) to the soloists, who also participate in the tutti sections. That seems a reasonable solution.

In the editions printed by Domenico Lovisa in Venice ten of the fifty Psalms include cantillation melodies used in the synagogues of the Sephardic Jews. Psalm L is not one of them, but Turco nevertheless decided to add such a melody. It is sung here by Rabbi Alberto Funaro of the Jewish Community in Rome.

The number of recordings of Marcello's Psalms is rather limited, which is regrettable. These are very fine works and seems the perfect expressions of the composer's aesthetical ideals. A complete recording of his Estro poetico armonico is long overdue. From that angle this disc is most welcome. Psalm L is only available in a recording from 1980, with René Jacobs, Guy De Mey and Kurt Widmer, which was reissued in 2011. However, in that recording the differentiation between solo and tutti is ignored. Psalm XLII seems to be new to the catalogue.

I sorely missed English translations of the lyrics. Even so, I have enjoyed these performances, which do full justice to the character of these Psalms. The three soloists do a good job, although Raffaele Zaninelli is sometimes a little too pathetic in Psalm XLII. The tutti are perfectly realised, and the playing of the instrumentalists also leaves nothing to be desired. The particiption of percussion is just a little flaw.