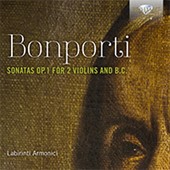 Francesco Antonio Bonporti is one of those Italian baroque composers whose name seldom appears in concert programmes and whose music is available on disc in only a few recordings. He has come to some fame when it was discovered that a couple of Invenzioni for violin and basso continuo, which were included in the catalogue of Johann Sebastian Bach's oeuvre, were in fact from his pen. These Invenzioni - from Bonporti's Op. 10 - may have inspired Bach to call a series of harpsichord pieces Inventionen.

Thanks to his social standing, Bonporti was not forced to earn a living as a professional composer. Formally he was an amateur, and he rather focused on a career in the church. He studied in his hometown Trent, then in Innsbruck and lastly in Rome, where he came in contact with Arcangelo Corelli, the leading composer in the city. It inspired him to the composition of four collections of trio sonatas, which he published as his Opp. 1 (1696), 2 (1698), 4 (1703) and 6 (1705) respectively. The fact that he was his own man and not in the service of an aristocrat, allowed him to be independent and not to follow conventions slavishly. That comes already to the fore in the fact that his printed collections all comprise ten pieces, instead of twelve, as was the custom at the time.

His independence also manifests itself in the trio sonatas Op. 1, which are the subject of the present disc. These ten sonatas are of the da chiesa type; all other collections include sonate da camera. There is some development within this collection: in the early sonatas the first violin is dominant, whereas in later sonatas there is more of a balance between the participating instruments, and that includes the cello, which has now and then an obbligato role. In some sonatas it even has short solos to play.

Most sonatas follow the usual pattern in the number and order of movements: slow - fast - slow - fast. However, here again Bonporti takes some liberties. The very first sonata opens with an adagio, but in fact only the opening and the end are slow; in between the tempo is more like an andante. The closing movement is fugal and opens with a lento episode, before turning to allegro. The Sonata No. 5 is the only one in five movements: it opens with an andante, which is followed by a vivace, a grave and an allegro e presto. The sonata closes with a very short alla breve. The Sonatas Nos. 7 and 9 both open with a fast movement, and include only one slow movement. The latter's first movement opens with a passage over a pedal point. In the last sonata two movements refer to the use of staccato, here called spiccato.

These sonatas are well written and a nice addition to the catalogue. Labirinti Armonici have already recorded Bonporti's Trio sonatas Op. 2 (Brilliant Classics 95718) and it is to be hoped that more recordings of his oeuvre will follow. The quality of Bonporti's writing fully justifies that it is given more attention, as Michael Talbot also argues in his article on the composer in New Grove. If you haven't heard anything of Bonporti, this budget disc is an excellent opportunity to get to know him. The players of Labirinti Armonici are skilled and enthusiastic advocates of his oeuvre. I look forward to future recordings.