Busoni Music for Violin and Piano 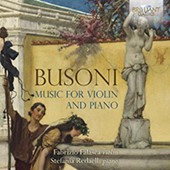 Busoni did not write much chamber music and the two main works here, the two violin sonatas, come at the end of his early period and on the cusp of his maturity. They are very different in character. The first, though a good and worthwhile work, is basically derivative, while the second is much more adventurous.

Busoni’s admiration for Bach, of whom he made many transcriptions and whose keyboard works he edited, is well known, as is his later admiration for Liszt, but in the first violin sonata we find him under the spell of the Viennese classics, both Beethoven and Brahms, but particularly the latter. There are three movements and they are respectively fast, slow and fast. Perhaps the D minor Brahms sonata is the closest in spirit to this of Busoni, though Busoni has no equivalent of Brahms’s ghostly scherzo. The themes have a similar cast, though I have to say that they are not quite as memorable. Still, it holds the attention and it is not at all surprising that it won a prize.

The second sonata is much more exploratory. Indeed, in many passages, it anticipates the Busoni of the later piano and orchestral works with their often strange and shifting moods. The model here is Beethoven, specifically the piano sonata in E, Op. 109. Busoni even uses the same key; also the same that he had used for the first sonata. As with the Beethoven, there is a first movement which moves between a slower and a faster speed, then a short and brilliant tarantella and finally a set of variations. The theme of these is a chorale from Bach’s Notebook for Anna Magdalena Bach, whose opening happens to coincide with the bass at the beginning of Beethoven’s variations. The variations are very varied, though, unlike in the Beethoven, there is a long section in the minor of distinctly Bachian cast. This is a very impressive work by any standards. It is not surprising that Busoni later said it was with this work that he found his way as a composer. He also he considered it as his real Op. 1.

Finally, we have the Bagatelles, which date from just before the first sonata. These are a set of four short character pieces, attractive miniatures without any of the weight of Busoni’s serious works. It turns out that they were written for Egon Petri. He was only seven years old at the time but already played both the piano and the violin. His father Henri Petri, was a distinguished violinist and a friend of Busoni. Busoni’s faith in the talent of his friend’s son was to be well repaid, as he went on to become a celebrated pianist and, indeed, exponent of Busoni’s piano works.

The performances by Fabrizio Falasca and Stefania Redaellui are fluent, musical and well-recorded. I find them less probing and imaginative in the second sonata than Per Enoksson and Kathryn Stott on BIS, who offer the identical programme, but their recording is over twenty years old and still at full price. There are also several other recordings of each sonata, some coupled together and some with different couplings. Still, Brilliant Classics have added to their admirable tally of Busoni works with this recording, which, at its modest price will give much pleasure.