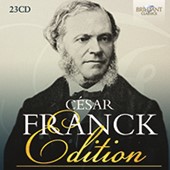 Over the years I’ve acquired several Brilliant Classics box sets and always admire their focus on specific composers, exploring the breadth and diversity of their compositional output. Not only do they provide a useful introduction to a composer but, at bargain price, they prove good value for those on a tight budget wishing to expand their collection. What I find attractive in this César Franck Edition is the interesting mix of popular works with some enticing rarities. Indeed, even for me, as a Franck fan, there are some first encounters such as the opera Stradella, Les Béatitudes, Les Sept Paroles du Christ sur la Croix and the piano transcriptions of four Schubert songs.

We kick off with three CDs of symphonic and concertante works. I find Franck’s imaginative and consummate orchestral writing quite seductive and, at times, ecstatic. Roberto Benzi and the Arnhem Philharmonic cover the Symphony in D minor, the symphonic poems Le Chasser maudit and Les Éolides and the three piano and orchestra items on CD 2. Benzi takes a leisurely approach to the Symphony but can be expressive when the music demands it. Les Eolides vividly sketches the playful antics of the wind, and here Benzi's dynamic gradients are applied to perfection. The Piano Concerto No. 2 in B minor, Op. 11 is something of an oddball. I wasn’t aware that Franck had composed a piano concerto. Apparently, he wrote this one when he was only thirteen. You certainly won't be short-changed on catchy melodies. Martijn van de Hock is the soloist. The Symphonic Variations for piano and orchestra, Opus 46 can seem rather rambling. Benzi keeps a tight grip on the reins and the overall result is convincingly cogent. The pianist François-Joël Thiollier serves the music well. For the symphonic poem Psyché we are offered the four orchestral excerpts, minus the choral sections. It’s a work that deserves to be better known. I prefer it in its complete original, and for that I would recommend the Chandos version with Tadaaki Otaka, for sheer sonic opulence. Kazandjiev and his Sofia players certainly don’t disappoint though, and this 1994 recording, with satisfying presence and depth, constitutes a useful introduction to this magnificent score.

We're treated to a generous helping, five CDs worth, of chamber music. Franck has often been called the father of Modern French chamber music, which gives this genre added importance. I'm not sure why the Piano Quintet has never received the attention of those by Schubert, Schumann, Brahms and Dvorak. Charles Tournemire thought differently when he proudly declared it the “King of piano quintets”. Parisian audiences have embraced it more warmly. I love it. It overflows with melancholy and passion. I'm not sold on the Vilnius Quartet’s lacklustre performance though; I did detect several intonation lapses along the way. Mûza Rubackyté somewhat saves the day, with some glowing pianism. The String Quartet, hindered by its prolixity and recorded by the same ensemble, likewise, doesn’t quite make the grade. The four Piano Trios have been rather neglected by the record companies, and apart from this early 1980s recording by the Academica Quartet with pianist Mihail Sârbu, which derives from a Dynamic label recording, I could only find one other, featuring the Trio Novanta on Tudor. I haven’t heard the Novantas to be able to offer any sort of comparison. The cycle in the set is superb and very well recorded. The engineers have struck an ideal balance between pianist and string players. The music itself is delightful and generous on lyricism. The ubiquitous Violin Sonata can be heard in two performances. Of these, I prefer the later 2014 recording on CD 23 with Kristóf Baráti (violin) and Klára Würtz for its more passionate vigour. Mariana Sîrbu and Mihail Sârbu are rather lethargic in the opening movement. I am pleased that the cello and piano transcription is included. It works well.

Three CDs are devoted to the composer’s solo piano music. The first two contain early music, written between 1841-45 when Franck was in his early twenties. Julia Severus and Francesco Bertoldi are the pianists on each disc. Franck was an accomplished keyboard player and spent some time in his youth as a touring virtuoso. All the pieces are technically exacting. Bertoldi concentrates on Fantasies. However, of the two it is the Julia Severus recording which provides more variety and interest. It opens with the epic Ballade, Op. 9, a lengthy work with two contrasting sections. Similarly, Souvenirs of Aix-la-Chapelle, Op. 7 is 16 minutes in length. Yet, it is the composer’s transcriptions of four songs by Franz Schubert which I enjoyed the most. Three of them received the same treatment from Liszt. Franck’s efforts are not so floridly virtuosic, but they still make for an enjoyable listen. Severus’ playing has astonishing range, as does Mūza Rubackytė’s who plays late piano works on the third disc. The highlight is the Prélude, Choral et Fugue. She achieves some rich sonorities and exquisite voicing, and her interpretation evinces a remarkable degree of fantasy. It’s one of the finest performances of this work I've ever heard.

CDs 11 and 12 feature the complete organ works, i.e. those pieces published in his lifetime; the Pièces posthumes from the composer’s youth are not included. Adriano Falcioni performs on the organ of the Papal Basilica of St. Mary of the Angels in Assisi, and a fine instrument it is too. The sound envelops you. Falcioni’s imaginative registration choices offer some impressive sonorities, and equally successful is the wide dynamic range he achieves. I'll just single out a couple of works that caught my attention. The Trois Pièces, of 1878, has a radiant Cantabile, bookended by a noble Fantasie and the ever popular Pièce Héroïque. In the Six Pièces, Op. 16-21, Franck breaks new ground by exploring the full potential of the organ’s registration and dynamics. None is more impressive than the second piece of the set, the ‘Grande Pièce Symphonique’, Op. 17, a mighty structure lasting over 22 minutes.

CDs 13 and 14 contain Franck’s complete works specifically written for the harmonium, although they are frequently played on the organ. The pieces are tailor-made for the smaller instrument. Each is virtually a miniature, intimate, charming yet refined. All are short in duration; they range from less than a minute to eight minutes. Joris Verdin plays an instrument housed in the Filosofisch Theologisch College van de Societeit van Jezus, Heverlee, Belgium. I can’t say that I am won over by the harmonium – for me it has a rather homogenous sound. I much prefer the organ.

As far as I’m aware, this live recording of Stradella, the first of Franck’s four operas, composed when he was 19, is the only one in the catalogue. It derives from a performance, conducted by Paolo Arrivabeni, given at the Opéra Royal de Wallonie, Liège, Belgium in September 2012. There’s no doubting that abundant lyricism runs the course of the opera, and there’s a suitable balance between the dramatic moments and more light-hearted ones. The cast is mixed, but I have to make special mention of Isabel Kabatu, who plays Léonor. She has too intense a vibrato for my taste, which is relentless and unyielding. Nevertheless, the work’s rarity more than justifies its inclusion.

We also get a comprehensive collection of the composer's sacred choral works. Les Béatitudes occupied Franck from 1869-79 and although he never lived to hear a public performance, apparently he witnessed a private one in 1879. Its length and scale, demanding huge forces, has prevented it establishing itself as a repertoire work. I can’t say I particularly like it and, having listened to it twice over the course of the past fortnight, it’s not long before tedium sets in. It doesn’t seem to reach the heights of musical inspiration. Yet Helmuth Rilling seems completely committed to the work and delivers an intensely compelling performance which will win over the hearts of many. He has secured fine soloists who perform with absolute conviction. Rédemption, much more familiar to me, is a work the composer referred to as a ‘Poème-Symphonie’. I got to know it via Michel Plasson’s 1994 EMI recording. This 1976 Netherlands recording compares very favourably, with Jean Fournet drawing out the very best from his forces. The Radio Choir particularly shine for their warmth and flawless ensemble. Les Sept Paroles du Christ sur la Croix, composed in 1859, is a musical setting of The Seven Last Words of Christ and is a real rarity. It was never performed during Franck’s lifetime and was only discovered in 1955, when the University of Liège acquired the autograph score from a private owner. Truly devotional, the arias are operatically rendered, and the choral passages beautifully constructed. My first encounter with this work is positive and, of the choral works on offer, this one goes to the top of my list.

As for the Mélodies, they are not that well-known, and it is the first time I’ve heard them. We are offered 16, the lyrics of which are taken from various poets.  Francesca Scaini has a powerful, but well-controlled, voice, and she’s acutely sensitive to dynamics. Mattia Ometto provides sensitively characterized accompaniments.

Brilliant Classics’ comprehensive survey covers most if not all of the genres that Franck worked in, and although some of the recordings are not always the best available, for the overall value many items would be hitherto unavailable. Each will have his or her own favorites. The opera Stradella or the Mélodies will be works I won’t be keen to return to, but the orchestral music, organ collection and piano trios will certainly entice me back. David Moncur’s accompanying annotations supply helpful background to the featured music, set in the context of the Franck biography. Sung texts of the opera, choral and vocal works are available on the Brilliant Classics website.