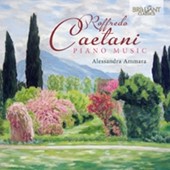 The music on this disc is a considerable find. Extravagant claims for the work of little-known composers may often be regarded with suspicion, if not downright hilarity. There is none here; those that are made are entirely justified. For example; ‘eclecticism and originality’, ‘music of quality and expressive power’; ‘one of the most important representatives of Italian instrumental music at the end of the 19th century’.

I would not argue with any of that. The keyword is originality; even though the influences of Schumann, Wagner, Brahms and Liszt may be heard - a musical heritage passed down through teachers like Martucci and Sgambati - the voice is individual. One might describe it as a fusion of Brahmsian and Wagnerian lines with fin-de-siècle tendencies.

A few words of background are in order. Scion of a Tuscan noble family and a godson of Liszt, Roffredo Caetani studied in Italy with Giuseppe Martucci and in Vienna and Berlin where he met Brahms. Most of his slender output was complete by 1907, though there are two operas - Hypathia and L'Isola del Solefrom 1924 and 1943 respectively – and a very small number of other works from later. Caetani continued to give public concerts until the death in action of his son Camillo in 1940 in whose memory he founded La Fondazione Camillo Caetani in 1956. In 1972, his daughter Lelia founded La Fondazione Roffredo Caetani. Although Caetani, who was 17th Duke of Sermoneta and 8th Prince of Teano, was the last male survivor of his line, the name lives on with the conductor Oleg, son of Igor Markevitch and Roffredo’s niece Topiaza.

Both Foundations were involved in the production of this CD which appears to be only the second devoted to Caetani’s piano music, the first having been recorded by Roberto Prosseda, the husband of Alessandra Ammara and insightful writer of the notes on this CD. He draws attention to ‘a preference for gloomy atmospheres and veiled sonorities’, and that is evident from the very first few bars of theBallata whose elaborate chromaticism produces a melancholy air. Even a rather stiffly gestural passage near the end fails to mar the overall effect.

The Four Impromptus are perhaps the most successful items on the disc; the dark effect of the chromatic language is alleviated by the lighter weight of the impromptu form. Here, as in the Toccata, which also has a touch of Beethoven about it, the influence of Schumann is most felt though Caetani’s singular voice is not eclipsed.

The Sonata may derive from the classical form but the latter two movements at least come across as extended rhapsodies with the character of ballades. Their expressive diversity is well articulated by Ammara’s variety of touch.

As to the playing, the pianism of Alessandra Ammara has been greatly admired in these webpages, for example: Ravel and Schumann.

I fully agree with the sentiments expressed in those reviews. Her work is subtle and delicate, her rubato relaxed and natural. Even though much of the music on this record is essentially low-key, she is able to maintain the interest with intelligent characterization and total commitment.

This CD serves as an introduction to some very worthwhile music and an excellent addition to a fine pianist’s discography.