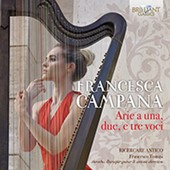 Born in Rome around 1610, Francesca Campana was known as a singer and spinet player, and her set of Arias in one, two and three parts published in 1629, when she was probably still a teenager, reveals a remarkable facility. While female composers were not unknown in Italy at the time, to have an entire publication devoted to your music as a woman was an unusual tribute and is surely a mark of the respect in which she was held. This is underlined by a letter of recommendation of 1633 in which her playing and singing are specifically and extravagantly praised. Her marriage to the composer Giovan Carlo Rossi seems to mark the end of her own compositional career although she lived on until 1665. The arias in the collection comprise solo airs with accompaniment as well as ensemble pieces we would be inclined to describe as madrigals. The writing is expressive and colourfully evocative – it is likely that Campana was writing largely for her own voice and an ensemble, and would probably have performed this music as well as benefiting from its publication. The performances here are imaginative, delicately ornamented and eloquently presented. The slightly close recording has an unfortunate deadening effect, and, as a result, some tracks sound a little plodding – perhaps a little more ambiance might have helped the music breathe a little more and the voices to ring more pleasingly. The arias themselves are interspersed with a beguiling selection of largely Neapolitan instrumental works from slightly earlier than the Campana pieces. This repertoire is catchy and engaging, and the playing is again charming and provides the perfect foil to the arias.