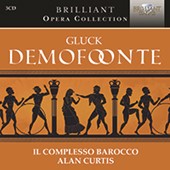 Demofoonte is a product of Gluck’s early years in Italy. He wrote the opera which premiered on January 06, 1743 for performances at the Ducal Theater in Milan. The libretto was by Pietro Metastasio who was the most popular librettist of his day. Metastasio had originally written the Demofoonte text for Antonio Caladra for a version of the opera, which was staged in Vienna in 1733. Metastasio’s text would go on to be re-used a staggering 60 times by other opera composers before the death of opera seria in general. Luigi Cherubini’s version is the only one I have come across in the past. It is no wonder that Gluck came to believe that opera composition required much needed reforms.

The plot concerns a certain Demofoonte who is King of Thrace. He has taken an oath to sacrifice a virgin of noble birth every year until a new (illegitimate) heir to the throne is revealed. Dircea is the next virgin scheduled for the sacrifice, although she is secretly married to the unknown heir, Timante. Timante is bound to marry the Phrygian Princess Creusa who just happens to love his brother Cherinto. Plot confusion abounds until Dircea reveals herself to be Timante’s supposed sister, and believes she is in an incestuous marriage. Eventually Timante is found not to be Demofoonte’s son, or the heir to the throne, so there is a happy ending for all concerned.

Gluck was a very skilled composer even at this early stage of his career. The opera abounds with beautiful crafted da-capo arias with gorgeous orchestral accompaniments. What it does not contain is music that plumbs the depths of human emotion. When one is so accustomed to the remarkable music he composed for Vienna and Paris for Alceste, Orfeo and the two Iphigenie’s, it leaves this reviewer feeling a little bit cheated by the decorative formality of it all. Demofoonte sounds much like a lot of other music from the baroque period, i.e. very pretty window dressing. Handel’s operas and oratorios do a much better job of reaching into, and touching the real emotions behind the music.

These recording sessions were used to prepare for the first modern performance of this work, which occurred in Vienna on Nov 23, 2014 with the same cast, literally one day after the last of the recording sessions. Some of the music must have remained unrecorded because the cast assembled again in Switzerland six months later to finish the job. The two different venues do not seem to affect the sound in any way as I could not detect any real change in the acoustical space.

Among the cast Colin Balzer is distinguished in the title role. His mellifluous and cultivated tone is always welcome whenever he shows up. His voice is almost too beautiful, and doesn’t really convey a sense of an older man who is deeply troubled by the vow he has been trapped in. Dircea is sung beautifully by Sylvia Schwartz; her voice palpitates with feeling as she executes her lovely decorative arias. Her Timante is the countertenor Aryeh Nussbaum Cohen; he sings his arias with gorgeous tone, particularly in the upper region of his voice which has a soprano-like purity to it. Ann Hallenberg is a real asset in her role of Creusa and her voice sounds sufficiently different from that of Ms Schwartz’s to not confuse which of them is singing. Romina Basso is a splendid Cherinto in every way; her rich, even voice produces a lush carpet of sound and she does as much as anyone can to bring real feeling to Gluck’s music. The orchestral side of things is in the skilled hands of Alan Curtis and his exemplary Il Complesso Barocco. Everything is managed with style and taste but I feel that this score needs something that is a bit more interventionist to be able to bring it to some sort of theatrical life. I can’t help wondering what someone like René Jacobs could make of this music.

The CDs come in a box set with a booklet that describes Gluck and his composition of the opera. There is a full Italian and English libretto which one must download from the Brilliant website. Curiously there is no description of the rather complex plot of this opera which is something Brilliant Classics hopefully will soon rectify on the web document.