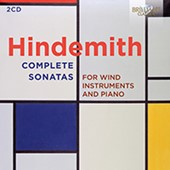 It’s strange how composers can go out of fashion, very often in the period immediately after their demise. That happened to Mahler, to Britten and to Sibelius, all now apparently secure in their reputations. The German composer Paul Hindemith, however, has the unusual distinction of never really having been in fashion at all – at least not in the last half century or so. He is widely recognised as an important and influential figure, but remarkably few compositions from his enormous catalogue have become settled in the repertoire. Maybe it is the very size of that oeuvre that causes the problem, as with Telemann and Milhaud; people find it hard to believe that when a composer writes that much, than any of it can be that good! And then again, where do you start?

Well, this 2CD set from Brilliant Classics would be an excellent answer to that question, at least where Hindemith is concerned. A series of ten sonatas for different wind instruments, all with piano accompaniment. If that sounds less than hugely compelling, let me say immediately that I was bowled over by these recordings. I knew two of these sonatas well, and had heard a couple more. But to have them collected together like this emphasises what brilliant pieces they are. All except one were written between 1936 and 1943, clearly as a series; yet each sonata approaches its task in a new way, and, though perfectly conceived for the solo instrument in each case, any stereotypes of the instruments’ characters are put aside. It’s important to recall that Hindemith played most of these instruments himself to at least some degree of competence, even though his main instrument was the viola, on which he was a true virtuoso (he gave the premiere of Walton’s Viola Concerto).

Hindemith also had his own very distinctive musical language, particularly with regard to tonality. As you listen, you may feel the music to be atonal at times; but as each phrase reaches its cadence or rest-point, you can often feel the gravitational pull of a tonal centre – even though those centres are constantly shifting. For me, the angularity of his melodies is attractive and expressive; the music is never ingratiating or soft-centred, but has a strong individualism, and a special beauty of its own.

All the performers here are Italian, with the exception of Jana Theresa Hildebrandt, who is drafted in to enact the strange recitation that comes before the finale of the alto saxophone sonata – more of that anon. The standard of playing is uniformly high, and it helps that the acoustic remains the same throughout; a little lacking in resonance, very ‘studio’, but one soon grows accustomed to it. A special word for the pianist, Filippo Farinelli, who has to play all the keyboard parts, some of which are ferociously difficult. If Hindemith had an uncanny insight into the technique and character of most instruments, the piano might be an exception (I know a few pianists who would agree!). Farinelli does a brilliant job – listen to the skittering semiquavers in the finale of the tuba sonata – track 21 around 5:00 – enough to give timorous souls nightmares!

There couldn’t be a better start to the discs than the creamy tones and exquisite control of Claudia Giotolli playing the Flute Sonata. She plays this, which is also one of the most attractive of all the sonatas, with great characterisation too, adding to her expressive lyrical playing some bright staccato and nimble finger-work in the very quick final movement of this three-movement work. Incidentally, she makes a return at the end of disc 2 with a tiny solo work, the Echo for flute and piano of 1942, a most welcome bonus.

The Oboe Sonata divides into two movements; the first a quick-slow-quick affair showing off both the dry staccato of the oboe and its smoother cantabile qualities. The second is sub-divided into four sections, this time alternating slow and quick. The soloist is Simone Frondini, who gives a fine account of this sonata, with bags of contrast, and, in the final section, an alert rhythmic sense.

The Bassoon Sonata follows, the shortest of the sonatas but a miniature gem. Again we have two movements, with the second sub-divided. Balance can be a problem in this piece, and just now and then, the excellent Filippo Farinelli is slightly heavier than he ideally needs to be for the bassoon soloist’s quite gentle, light tone. Luca Franceschelli plays with an unfussy sensitivity to the flow of the music with all its contrasts. A pity, though, that he starts the second movement so softly that you can’t actually hear the note.

From the shortest to one of the longest of these works. The Clarinet Sonata is quite a complex piece in four movements, with the second and fourth subdivided, in Hindemith’s way, into sections of differing character. Simone Simonelli is principal clarinet at La Fenice in Venice, and is as fine a player as you might therefore expect. He gives a beautifully graded and imaginative performance, and you have the sense that he and his pianist are involved in a close dialogue, full of little surprises and jokes. His tone throughout the registers in the sustained legato of the third movement is exceptionally smooth and even – true mastery of the instrument, which makes these tracks among the discs’ highlights. CD1 is completed by the Horn Sonata, another quite extended piece, this time in three movements, performed with supreme confidence and musicianship by Gabriele Falcioni, a player of great repute, who was for some time principal horn at La Scala.

Moving on to CD2, we come to the interesting phenomenon that is the Sonata for Trumpet and Piano. Initially, Hindemith seems to be conforming to the martial connotations of the instrument. But then the third movement is titled ‘Trauermusik’ – ‘Funeral Music’, and he goes to the length of using, as the movement’s basis, an ancient chorale melody, ‘Alle Menschen mussen sterben’ – ‘All men must die’ - also set by J.S.Bach. I wondered if there might be some personal significance in this, but have yet to find any evidence, and it seems to be a political rather than a personal statement. In 1939, Hindemith was living as an exile in Switzerland, where he watched his own country annexe Austria, occupy Czechoslovakia and invade Poland, while its leaders were intensifying their obsession with anti-Semitism (Hindemith was Jewish). The Trumpet Sonata, perhaps to Hindemith’s own surprise, became a protest and a profound lamentation. He was especially proud of it, and wrote to a friend that “it is maybe the best thing I have succeeded in doing in recent times.”

Up to this point we have encountered sonatas in two, three or four movements, often in several sub-sections. The English Horn Sonata marks a slightly different approach, being in six quite short movements, of which the languid first is the longest. Inevitably, the melancholy tone of the instrument colours the music, albeit with brighter, more extrovert passages. The plaintive upper register is fully exploited too, and Maria Chiara Braccalenti is equal to all the challenges posed. There are some magical moments, especially in the lovely moderato fourth movement.

I referred earlier to the ferocity of some of the piano writing; the Trombone Sonata, which comes next, is a prime example. The piano thunders about apoplectically, while the trombone holds forth in resplendent long notes – a touch of Dives and Lazarus perhaps! The third movement has a curious title, ‘Lied des Raufbolds’, usually translated as ‘Song of the Ruffian’. I hesitate to say that the trombonists I know fit that description, but the swashbuckling character suits the instrument down to the ground, and Gabriele Marchetti rises to the challenge.

The penultimate sonata is the one originally written for the instrument known in German as the ‘althorn’, a brass instrument known to English musicians as the ‘tenor horn’. It rarely appears in orchestral or chamber music, but is still an important member of the typical brass band. Hindemith may have realised that the instrument was becoming something of a rarity, so he offered alto saxophone as a viable alternative, which is how it is performed here by the brilliant David Brutti. However, the work’s singularity does not end there; before the finale, there is an exchange between the pianist and solo instrumentalist, where they are required to recite short poems by Hindemith himself. There is no translation given in the booklet, so I include one here:

English Translation of “Das Posthorn” by Jennifer Hemken
Hornist:
Is not the sounding of the horn to our busy souls
Like the scent of blossoms wilted long ago
Or the discoloured folds of musty tapestry
Or crumbling pages of ancient yellowed tomes?
Like a sonorous visit from those ages
Which counted speed by straining horses’ gallop
Not by a current of electricity through cables
When to live and learn one ranged the countryside
Not buried in closely printed pages.
The cornucopia’s gift calls forth in us a pallid yearning, melancholy longing.

Pianist:
The old is not good, just because it has passed
Nor is the new great, because we live in it
No one experiences happiness beyond one’s comprehension.
Your task it is, amid confusion, rush, and noise
To grasp the lasting, calm, and meaningful
And finding it anew, to hold and treasure it.

These thought-provoking words are recited on this CD, not by the performers, but by Jana Theresa Hildebrandt, herself a professional flautist. Profound contemplation may well be swept away by the pianist’s torrent of notes to begin the finale. It seems to me that this final movement is an interpretation - or an actual embodiment - of Hindemith’s words, for the piano’s twitchy, jagged dance is counterpointed by a folk-like melody in the saxophone.

The work for tuba is the final sonata, played by the splendidly named Gianluca Grosso – surely a fine case of nominative determinism! And the little Echo, where flute and piano ‘shadow’ each other, makes a charming codetta to the whole programme.

I enjoyed these generously packed CDs so much; this is music that, though it certainly doesn’t grab you by the lapels, has abundant charm. All the works are object lessons in how to exploit the natural character of an instrument without leaning too heavily on clichés or stereotypes. And the quality of these performers, all of them Italian, is an impressive testament to the standard of that country’s instrumentalists.