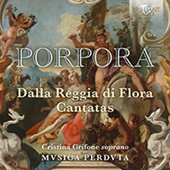 There seems to be a growing interest in the oeuvre of Nicola Antonio Porpora these days. Rightly so, because he was one of the most celebrated composers of opera in his days, and was especially famous as a singing teacher. Among his pupils were some of the best-known castratos. Porpora also considerably contributed to the genre of the chamber cantata, one of the most popular forms of vocal music in Italy in the first half of the 18th century. In recent years several discs with cantatas have been released. Although the track-list doesn't mention it, there is a good chance that most cantatas included on the disc under review here are first recordings.

The seven cantatas have two things in common: they are scored for soprano and basso continuo, and they are all about flowers and plants. Renato Criscuolo, in the liner-notes to this disc, states: "We do not know exactly why [Porpora] dedicated so many compositions to Flora's Realm, the Reggia di Flora, but it is clear that the floral motif related to love stories and was commonly used in the secular cantatas of the time. Roses, violets, sunflowers, lilies, plane trees and jasmine framed the largely unhappy amorous dalliance of nymphs and shepherds, or unfaithful lovers." In what way that is exactly worked out musically has to remain largely a mystery to those listeners, who are not able to understand Italian. The booklet includes the lyrics, but omits translations. That is a major shortcoming of this interesting production.

One thing these cantatas make abundantly clear: Porpora's skills in writing for the voice. No wonder: as one of the main singing teachers of his time, he had an intimate knowledge of the voice and its possibilities. These pieces also bear witness to his theatrical instincts: even when one does not exactly understand the lyrics, there can be no doubt that he knew what to do with a text. There is plenty of variety in the way he treats the voice, both in the recitatives and the arias. Some words are graphically illustrated, such as "scuote" (shakes) in the recitative that opens the first cantata, Dalla Reggia di Flora, or "povero fior" (poor flower) in the first recitative of Povero fior di Clizia. These cantatas are the only two which have the most common form of two pairs of recitative and aria. The other cantatas consist of two arias embracing a single recitative.

It is not just the music which makes this a disc to enjoy. That is also due to the performance. Often I complain about unstylish ways of singing, in particular an incessant and often wide vibrato. Nothing of that compromises these performances. Cristina Grifone has a lovely voice, which produces a sweet sound, and is very flexible, which is needed in order to deal with the frequent coloratura. I also often notice that the recitatives are sung too strictly in time. Again, that is very different here. The performance of the recitatives is very speech-like and completely natural, in a rhythm which is based on the text rather than the bars. Obviously, the fact that Cristina Grifone is a native Italian speaker is a great advantage.

Her performances of the arias leave little to desire. She does not hold back in the addition of ornaments, and these are mostly well-judged. Only in a couple of instances, she crosses the natural tessitura of a cantata, which is generally undesirable. She ends the dacapo of the second aria of Dalla Reggia di Flora an octave above what is written down. That is something for which I can't see any justification. However, these are very minor issues, considering the quality of the singing and the interpretation.

Renato Criscuolo (cello) and Alberto Bagnai (harpsichord) give quite some impulses from the basso continuo. In particular Criscuolo's playing is dramatic, when there is need for it. The balance is a bit too much in his favour; the harpsichord could have been more clearly audible. As far as the production is concerned: the pauses between the tracks within a single cantata are a bit too long, at the cost of a natural flow between recitatives and arias.

Musically this is a very rewarding disc: Porpora's cantatas are excellent stuff, and the performances can hardly be surpassed. My only real problem is the lack of translations of the lyrics. That is the reason that I can't give this disc the label of a special recommendation.