Once Upon a Time - Arrangements for Guitar 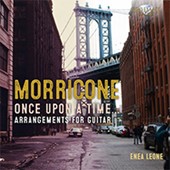 Morricone meets the guitar in these arrangements of some of his classic film scores. The arrangements were made either by Enea Leone or Carlo Marchione and recorded in the pleasingly warm acoustic of the Chiesa di Frazione. Leone, who fortuitously shares his surname with the great Sergio, master of the spaghetti western – for whom Morricone wrote so many scores - is the intrepid instrumentalist seeking to embody music both romantic and martial in solo guitar guise.

Leone charts a wide variety of Morricone’s music, from Nuovo Cinema Paradiso via the Westerns to Tarantino’s relatively recent Inglourious Basterds. There are two selections from the first-named, the beautiful Love Theme and the bipartite Prima gioventù, which is phrased with particular care the better to draw out its many felicities. This shouldn’t come as a surprise as Leone, a pupil of Alirio Díaz, has also recorded works by Castelnuovo-Tedesco, Sor and music from Argentina (with bandoneonist Roberto Bongianino) for Brilliant Classics to notably fine effect. Whilst the music for Once Upon A Time in The West – two tracks, played with refinement - A Fistful of Dollars, and The Mission (Gabriel’s Oboe) are soundtracks of popular culture, the music for La leggenda del pianista sull’oceano is probably less well-known, which makes its inclusion here the more valuable. It’s not music one would immediately associate with Morricone but does reflect the variety of his film work – there’s a Jelly Roll Morton evocation (The Crave, one of Jelly’s set pieces) – and a Mozart pastiche, reflective of the opening movement of the Piano Sonata K331.

Chi mai, originally used for the 1971 film Maddalena, was picked up a decade later by the BBC for its TV series about the life of David Lloyd George, at which point it hit the UK singles chart (I didn’t buy the single but I did buy the LP - not the hippest selection for an 18 year old). Its lyrical melancholy easily survives the guitar arrangement. Strangely, I hadn’t appreciated until hearing this version of Indagine su un Cittadino al di sopra di ogni sospetto (Investigation of a Citizen Above Suspicion) quite how much Morricone doffs his cap here to Bernard Herrmann, though given the music’s crime drama and noirish tendencies that shouldn’t come as a shock.

There are plenty more pleasures besides, including a really splendid and toe-tapping version of the Poker d’Assi from For a Few Dollars More and, as a finale, The Good, the Bad and the Ugly, complete with a well-timed outburst and nice fills. What better way to end?