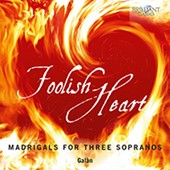 An ensemble of three sopranos and basso continuo is a bit of a rarity. That is not surprising, given that the repertoire for such a line-up is not very large. This explains why only a part of the programme consists of pieces for three sopranos, whereas the remaining items are for two sopranos.

The main composer of music for three high voices is Luzzasco Luzzaschi. He had a good reason to write such music. He was from Ferrara and was connected to the court of the Este family all his life. Alfonso II, Duke of Ferrara, founded an ensemble with the name of Concerto delle donne in 1580 which sang at his court until its dissolvement in 1597. The ensemble consisted of three professional female singers, praised by a contemporary as "young virtuosos". They performed for the inner circle of the court and important visitors. Although they did not perform in public, their reputation disseminated across Italy and inspired other courts to found comparable groups of singers.

The virtuosity of the three ladies is reflected in the music of Luzzaschi, who explored their qualities in the tessitura of the vocal parts and the written-out ornamentation. This was imitated by other composers, such as Marenzio and Monteverdi. Lodovico Agostini dedicated some of his songs to Luzzaschi and to the most famous of the female singers, Laura Peverara. Carlo Gesualdo and Giaches de Wert were among the composers who wrote music for the three ladies. Monteverdi's Canzonette a tre voci may also have been intended for the Concerto delle donne.

Luzzaschi's collection of madrigals for one to three voices was published in 1601, but the music was probably written about ten to twenty years before. Luzzaschi himself accompanied the ladies at the harpsichord, and it is notable that the score does not include a basso continuo part, but rather a written-out keyboard part. The time of the basso continuo had not come yet, when Luzzaschi wrote these madrigals. The two items included here show how Luzzaschi paid much attention to the text and explored the qualities of the three ladies.

Later composers followed in his footsteps and added harmonic experiments for expressive reasons. Monteverdi's Ohime dove il mio ben is a good example. Another is Siam tre miseri by Giacomo Carissimi: "We are three miserable weepers, who increase our plaint hourly to the most turbulent torrent, and challenging fortune and the elements we go to war." The three voices represent the three characters, and all three have short solos. This way, Carissimi creates a dramatic dialogue, which is in line with his preference for the form of the oratorio, the sacred counterpart of opera.

No less dramatic is Fan Battaglia, a piece by Luigi Rossi, which closes the programme. Here, Rossi, who was famous for his operas and cantatas, makes use of the stile concitato: "My thoughts are waging war and fiercely assaulting my heart". It ends brilliantly and in truly theatrical style: "So crowded warriors battle against my heart, my thoughts are waging war".

Very different in character is the longest piece in the programme. Lo Specchio by Antonio Draghi is a cantata which he composed for the birthday of Empress Leonora in Vienna, where he worked at the imperial court from 1685 until his death. It is a kind of philosophical reflection on the features of the mirror, with many references to mythology. The largest part of this piece consists of solo episodes.

The members of the ensemble have put together an interesting programme, which shows the vocal, expressive, harmonic and dramatic possibilities of a combination of two or three sopranos. As the pieces by Luzzaschi have been recorded before, it is nice that we get here a number of works that are hardly known. This is the debut recording of Galàn, an ensemble founded in 2009. It is a shame that it is only released seven years after it was made. Because of that one wonders whether it tells us much about the present level of Galàn. That said, there is every reason of being happy with its release. I have greatly enjoyed the singing of Alison Hill, Katy Hill and Lucy Page, whose voices match perfectly, and whose command of the virtuosic coloratura is quite impressive. The expressive and dramatic features of the pieces included here come off to the full. The pieces by Carissimi and Rossi are outright exciting. Manuel Minguillón and Christopher Bucknall are their equal partners on theorbo and harpsichord respectively, and deliver nice contributions in two solo pieces.

I hope we don't have to wait another seven years for this ensemble's next disc.