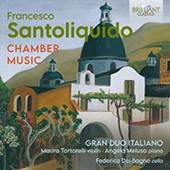 Pianist Ornella Puliti Santoliquido gave her name to what became known as the Trio Santoliquido. Ornella took the surname from her husband Francesco Santoliquido. Their Schubert, Mendelssohn, Brahms and Beethoven LPs held sway among collectors in the mid-20th century. They were issued on DG and, in our own times, resurrected on Divine Art and Forgotten Records.

Francesco, the composer, was born in Naples. His musical education took place in Rome. He was no insurrectionist when it came to musical styles. The classical side of romanticism was his thing with the added tincture of the middle-east flowing from his years (1910-1933) in Tunisia where he founded a concert society and a conservatoire.

Except for the Violin Sonata we are not given the dates of the many works on this disc but I surmise that they were the products of his fecund years in Tunis and Hammamet where we are told he dipped into Arabic music. He returned to Italy in the mid 1930s and made his home in Anacapri. A prolific composer for the theatre (three operas), he also produced works for the orchestral concert hall.

Surgingly red-blooded lyricism strides out to embrace the listener in the vivacious outer ‘panels’ of the three-movement Violin Sonata in A minor. Whether it is in this mood or in the languor of the Andante Mauro Tortorelli and Angela Meluso engage with skill in and dedication to Santoliquido’s tensely melodious ways. The music recalls aspects of John Ireland’s Second Violin Sonata, of Delius’s Violin Concerto and of Respighi’s Concerto Gregoriano. This is a nice piece, if a touch repetitive in the first movement.

Two short violin/piano pieces are next. The heartbeat of Chiarità Lunare (1929) manages to be both lush and unhurried. The Rêverie has its trembling hummingbird moments to set beside a predominance of Fauré-like dreams.

The other largish-scale work here is the Trio fantasia la favola di Helga for violin, cello and piano. It’s agreeably rhapsodic and romantic in about 13 minutes and a single movement. The temperature is a degree or ten more moderate than the Sonata but just as aspiring and idealistic. It had me thinking of the Delius Cello Sonata but without the big tune. The diminutive Aria antica for cello and piano is in much the same domain but with grand swinging bell-sounds and a stolid conclusion. It has the air of something from a much larger work.

Then come six pieces for solo piano ranging from the ambitious-achieved to the salon-modest. The pair of short Acqueforti Tunisine (or Tunisian Etchings). The subtle, mystery-laden, slightly Griffes-like La notte sahariana is the first of these. The second is the slighter and less satisfying La danzatrice araba. The tremulous Notturno is followed by the charmingly relaxed Piccola ballata. More than charm energises the Giardini notturni which inhabits worlds close to de Falla’s Noches but cross-cut with fey Cyril Scott accents. Again, bell sounds lend a profundity to this six-minute piece. The disc ends with Ex Humo ad Sidera (From earth to the stars). The notes recount that this “describes mankind’s terrible struggle in rising from the dark, savage state towards Light.” It has a Lisztian palette and a mien strivingly equal to the declared subject matter; a kind of Per ardua ad astra.

I could have done with more date-specifics but the liner-notes in English and Italian by Tortorelli and Meluso take the listener firmly and usefully in hand.

Brilliant Classics, generously augmented by Naxos, have shaken any remaining presumptions about 19th century Italy being overrun by opera as a genre. The names and various musics of Sgambati, Alfano, Pizzetti, Martucci, Ghedini, Pilati, Perosi and Longo are well and truly registered. Santoliquido joins their phalanx as a notable Rhapsodic-Ecstatic.