Franco Margola Music for Mandolin and other Chamber Music 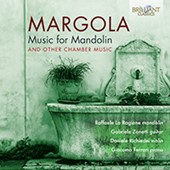 The work of Franco Margola doesn’t seem to have attracted much attention in the UK. A couple of Italian friends, when I visited them quite a few years ago, (both then being music students in Milan) performed some of his music for me, and I have remained intrigued by this interesting figure. While deeply grounded, as a composer, in the classical tradition, Margola’s use of that idiom often employs it in ways that incorporate ‘modern’ touches. His music, so far as I am familiar with it, is consciously unassuming, entirely free of any kind of pretentiousness, grandiosity or the searching for novelty. What it does consistently demonstrate is his cultured musicality and the subtlety of his ideas and emotions.

Though he may be relatively little known outside Italy, it is surely significant that no less a figure than the late Arturo Michelangeli sometimes included pieces by Margola in his recitals (Margola’s Piano Conerto of 1943 was dedicated to Michelangeli). In the last few years there has been something of a flurry of CDs devoted to Martgola’s music – most of them originating in Italy. Tactus, based near Bologna and one of the labels most consistent in its support of Italian music, issued in 2018 a 3 CD set of Margola’s complete piano works (TACTUS TC901380), played by Alessasndro Deljavan. On the same label there was, in 2012, a single CD (TACTUS TC 01380), Musica per archi e concerti per oboe, which might serve well as a good introduction to Margola’s musical world. Other interesting recordings include a disc of Chamber Music on the Stradivarius label (STV 33982), issued in 2014 and containing recordings of two very interesting piano quintets. Now, from Brilliant Classics, comes the present CD, a well-played disc, both lively and disciplined, celebrating Margola’s characteristically quirky fascination with the mandolin.

Margola was born (and died) in the province of Brescia. He studied violin at the then Istituto Musicale in Brescia, graduating in 1926. He then studied composition in Parma (at the Regio Conservatorio di Parma) from 1927 to 1933. In 1933 he met Alfredo Casella, who encouraged him and, as pianist of the Trio Italiano, gave many performances of an early piano trio by Margola. While he continued to compose, from 1936 onwards Margola held a series of teaching positions at Italian conservatoires. From 1936 to 1939 he taught in Brescia (specializing in the history of music); in 1939 he took a post in Messina; however, in 1944 the Germans deported him to Mühldorf (where there was a complex of concentration camps). Following the end of the war he was able to return to Italy, initially to Brescia. From 1950 to 1952 he taught at the Bologna Conservatory, and from 1952 to 1957 at the Conservatory in Milan (specializing in harmony, counterpoint and fugue). He later taught at conservatoires in Rome and Cagliari; from 1963 to 1975 he was back in Brescia (teaching ‘advanced composition). He died in the commune of Nave, in the province of Brescia, in March 1992.

Although he wrote three symphonies and two operas, it is, I think, fair to say that Margola’s best and most characteristic writing is to be found in his chamber music and his compositions for piano. At heart, Margola is a miniaturist – but his miniatures are not merely ‘slight’, they are exquisitely worked things of beauty. His essential modesty of character and ‘ambition’ – reactions, in part, to the excesses of late Romanticism, are evident in many of the titles he gives to his compositions, which can sound self-deprecatory, such as ‘piccola rapsdoia d’autumno’ (for piano), ‘piccolo concerto for oboe and strings’, his four works described as ‘piano sonatinas’, and amongst other works for piano, the ‘6 sonatine facili’, the ’15 pezzi facili’ and the ‘Altri 15 pezzi facile’. One might also mention the two ‘Kinderkonzert’. The prevailing idiom is neoclassical. Temperamentally Margola seems to have been very receptive to the example of Casella’s neoclassicism (and through him, to French neoclassicism). One might describe Margola’s prevailing idiom as grounded in Haydn (there is much of his geniality in the best of Margola’s music) and Mozart, filtered through the calmer music of Poulenc and Casella.

On the present CD we hear Margola using the mandolin in duet with the guitar (‘Grande Sonata’) and, more surprisingly, with the piano (‘Moderato’ and ‘Adagio’) as well as in the ‘Tre pezzi’ and the ‘Romanza senza parole’. It is also deployed in the closing ‘tribute’ to Margola, written by the violinist Daniele Richiedei.

Though not really a disc to be listened to straight though, given that the range of dynamics is narrow and there is, largely speaking, a uniformity of idiom, this CD rewards cherry-picking of individual tracks. After 4 or 5 listens, my favourite tracks (at present!) are the ‘Allegro’ for violin and guitar (track 3), the ‘Romanza senza parole’ for mandolin and piano (track 14), and the ‘Fantasia’ for guitar and piano (track 5). In these last two examples, I love the ways in which Margola controls and exploits the interplay between plucked and percussive sounds.

In truth, almost all of the tracks are quietly delightful, reflections of what seems to have been Margola’s innate modesty. He is a prime example of a very well-schooled composer who can write fluently in an idiom which is not that of his own time, without seeming merely dry or academic. In the January 20020 issue of the BBC Music magazine, in the course of an article on Les Six, Roger Nichols reminds us that Germaine Tailleferre “modestly placed herself ‘among the little masters of the 17th and 18th centuries’”. I suspect that Margola might well have chosen to say the same of himself (and we should remember that during his years in Paris Casella – such an influence on Margola – had a good deal of contact with the composers of Les Six).

Even in Italy, Margola’s reputation faded somewhat in the years after World War II, when attention turned much more towards works in the manner of the European avant-garde of the day. Margola’s use of classical forms and his employment (predominantly) of traditional tonality were now distinctly unfashionable. Renzo Christi explains the phenomenon very lucidly:

“Margola belongs to an unfortunate generation, squeezed between the Generazione dell’Ottava [Casella, Alfano, Malipiero, Respighi and Pizzetti] and the composers born in the twenties (Maderna, Nono, Berio etc.) who, benefitting from the indisputable advantage of beginning to write after World War II, in a more open and favourable social environment, directed their work on very different tracks […] [Critics] were not able to recognize in musicians such as Margola the specific historical function of consolidating and bringing forward the new attention that Italian musicians had directed to instrumental music, giving it again a principal role and rescuing it from the dominion of opera”.
Renzo Christi, Il linguaggio Musicale di Franco Margola (Milan, 1994, p.12), quoted and translated
thus in Federico Bonacossa’s Doctoral Essay (University of Miami, 2009), Franco Margola’s
Chamber Works with Guitar, p.4.

However, as noted above recent years have seen a renewal of interest in Margola’s works – a renewal of which this CD is a particularly fascinating fruit.