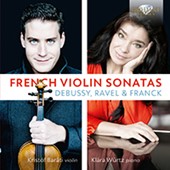 There are several desirable recordings of these sonatas, mostly at full price and, mostly, differently coupled. This new Brilliant Classics CD comes at an attractive price and the coupling is very apt. Kristóf Baráti has already won praise from no less than Ida Haendel, and his Strad has been highly rated for its warm tonal qualities. Can this new recording compete with the best? In fact, the Franck has already appeared, one of two recordings of the Violin Sonata on the Brilliant Classics 23-CD set of the music of the composer, and praised for its ‘passionate vigour’ by Stephen Greenbank – review.

In 1918 Harmonia Mundi gave us a large helping of Debussy for the centenary of his death, including his last three sonatas, for violin, cello and flute, viola and harp (HMM902303). With period-performance specialists Isabelle Faust and Alexander Melnikov in the Violin Sonata, it’s hardly surprising that it won a massive number of accolades: ‘as fine a performance as you are likely to hear’ from William Hedley – review. It challenged even my long-held allegiance to Arthur Grumiaux and István Hajdu (Eloquence) – Autumn 2018/3.

That classic recording by Arthur Grumiaux and István Hajdu makes an apt comparison with the new Brilliant: it’s available for a similar price, around £7.50, on a single CD, with the Cello Sonata and the Ravel G major Violin Sonata and Piano Trio (4683062), two of the three works on the new Brilliant Classics CD, or as a 2½-hour download containing all three of the works on Brilliant plus Fauré’s two violin sonatas and music by Ysaÿe and Lekeu (442899, around £15 in lossless sound).

There’s very little disagreement about the basic tempi for the Debussy: Kristóf Baráti and Klára Würtz are only seconds apart from Grumiaux and Hajdu in all three movements. If they are a trifle less vivo in the first movement, they are a whisker more animé in the finale. More importantly, it’s apparent from the beginning that these young players have a natural rapport with Debussy worthy to stand comparison with their distinguished predecessors. Though only the middle movement is directed to be fatasque et léger, there’s an element of fantasy throughout the sonata, which Baráti and Würtz capture almost as well as anyone. I don’t like to make too much connection between a composer’s life and works, but it’s as if the terminally ill Debussy in the middle of an awful World War was returning to the style of Pelléas et Mélisande from 14 years earlier.

Grumiaux and Hajdu in the Ravel have been around the block a few times. As well as the Eloquence CD and the 2-CD download, it’s also appeared with the String Quartet and Piano Trio on Phillips Classics and on a multi-CD Decca box of Grumiaux’s recordings 1953-1962. Here again, there’s very little difference in basic timings between the older and the new recordings.

If the mood of the Debussy is determined by fantasy, that of the Ravel adds the jazz element, most at play in the central movement, Blues. Grumiaux and Hajdu make it sound as if Stéphane Grappelli is playing and the same virtuoso technique is evident in the allegretto finale. It’s labelled perpetuum mobile and they make it sound as if it might go on for ever. If anything, Baráti and Würtz are a shade more smoochy in Blues, but there’s very little in it, here or in the finale.

So that’s two of the three works where Baráti and Würtz prove thoroughly competitive. It’s back in time to César Franck for the third. There are several very fine accounts of this work, including Alina Ibragimova and Cédric Tiberghien, a multi-award-winning recording (Hyperion CDA68204, with Vierne, etc. – review) and a period-instrument performance from Isabelle Faust with Alexander Melnikov on an Érard piano from c.1885 (Harmonia Mundi HMM902254, with Chausson Concert). Reviewing these two together in Spring 2019/1, I wondered if my old favourites were secure – Grumiaux, this time with György Sebök and Kyung-Wha Chung with Radu Lupu. In the end I still found myself preferring Grumiaux by a sliver, but wondered if that was because of long acquaintance.

I especially enjoyed the Harmonia Mundi recording; though the dry-ish timbre of the Érard piano takes a little getting used to, with something of the fortepiano still about it, that’s the sound that Franck would have expected, together with the gut-stringed violin. Faust and Melnikov linger over the opening movement, as do Ibragimova and Tiberghien, both pairs savouring, as it were, the aroma of the meal which is to come. Baráti and Würtz, faster here on paper, though hardly noticeably in practice, give the impassioned middle section a bit more of a push. All three interpretations work well, with the mystery of the opening and the sweetness of the end of the movement well conveyed without sounding cloying.

There’s much more agreement about the second movement and the finale, but Ibragimova and Tiberghien savour the recitativo fantasia ben moderato third movement a little more than the others, with Baráti and Würtz again faster than either of the other recordings, though it’s only by comparison that you would notice the difference.

The end of this sonata truly crowns the work. Baráti and Würtz give an attractive account, but this time it’s Ibragimova and Tiberghien, slightly more energetic, who win my heart by a small margin over the other two recordings. All that being said, it’s safe to choose by preference of coupling, period- or modern-instruments, and price. If the Brilliant Classics recording ticks all three boxes, you won’t go wrong.

I couldn’t resist listening after all these recordings of the finale to Grumiaux and Sebök. Was it nostalgia and/or familiarity, or did it sound just that little bit more magic than the others? Just to show how subjective this game can be, I note that when released in 1980 and, again, when reissued on CD in 1984, their recording was judged to be too straightforward.

The Grumiaux recordings have worn very well, so much so that the new Brilliant Classics, good as it is, is not significantly better. I ripped both recordings in lossless (flac) sound to compare them and could hardly tell them apart in quality. The Hyperion and Harmonia Mundi are both in 24-bit format, so the comparison is a little unfair, but they don’t leave the Brilliant Classics far behind.

The booklet is better than we often get with budget price recordings, and I see that it’s offered with the download, though on this occasion my review is from CD. With a target price of £6, this offers good value - actually better value than the lossless download.