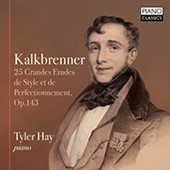 When Chopin arrived in Paris in late 1831, the city was already bustling with the great and good of the piano world. Of these, perhaps the greatest (especially in his own opinion) was the German-born virtuoso Friedrich Kalkbrenner. Others were making their mark – Henri Herz, Ferdinand Hiller and Franz Liszt to name but three – but it was Kalkbrenner who galvanised the young Pole. The booklet notes quote Chopin: “Herz, Liszt and Hiller are all zeros next to Kalkbrenner”. Kalkbrenner offered to teach Chopin, and we can only be grateful that Chopin declined the offer. Who knows in what ways the older virtuoso’s rigorous classical training and overpowering nature would have stifled Chopin's innovative creative genius?

Friedrich Kalkbrenner, a product of the Paris conservatoire, won first prizes in piano and composition. After an extended sojourn in London, he returned to Paris in 1824 and settled there for the remainder of his life as a teacher, a partner in a piano firm, and a highly successful pianist. That Kalkbrenner was a giant among pianists was beyond doubt. His acerbic nature and arrogance hardly endeared him to his peers but most acknowledged his mastery of his chosen instrument: “as polished as a billiard ball”, as one pianist put it. It is probably fair to say that Kalkbrenner’s star began to shine less brightly in the late 1830s. Liszt had been transfixed by the virtuosity and presence of Paganini; after a period of intense, feverish study, he was now the brightest star in the pianistic heavens. The Swiss-born Sigismond Thalberg was soon considered to be his only serious rival. There is almost something forlorn in Kalkbrenner’s comment when Gottschalk told him about his recital of works by Chopin, Liszt and Thalberg: “Why did you not play one of my pieces? They are beautiful, please everybody and are classical.”

Thanks to Tyler Hay, we can judge them for ourselves. Both the Grandes études and the Variations offer a fascinating glimpse into the piano world of the time. I will not deny that I loved listening to this music. It will never set the world on fire like the études of Chopin or Liszt but are clearly the work of a man who adored the instrument and knew its capabilities well. The range of technical challenges is enormous. There are lots and lots of octave work and repeated notes; both are combined in the ruthless and irresistible 3rd étude or the tempestuous 17th, a strong candidate for influencing the famous staccato étude by Anton Rubinstein. Consider fleet fingerwork in the scintillating 8th étude and the tarantelle that closes the set, keyboard spanning chordal work, athletic hand crossings, sixths and thirds galore – and yes, I will grant the composer, some beautiful music. Most memorable in this case for me is the 13th étude. Kalkbrenner employs in it the three-hand effect, the thumb taking the melody beneath broken chords and octaves. The mournful C sharp minor étude is a lovely study in counterpoint and voicing.

The Variations brilliantes take as their subject the famous Mazurka in B flat, the first of the set of Mazurkas op. 7 that Chopin wrote around the time of his arrival in Paris. Chopin’s rejection of Kalkbrenner’s offer of tuition must have smarted, and these variations were written as a result. They are evidently Kalkbrenner’s way of showing the young Pole what he could have achieved under his tutelage: very much a 19th century version of “Let's see what you could have won!” Like the Études, they bristle with technical challenges. Not the least of them is the introduction, which makes no reference to Chopin’s music at all other than to employ the distinctive rhythm in the declamatory opening octaves. Here are all of Kalkbrenner’s octaves, leaps, scales, arpeggios, repeated notes and diverse decorative curlicues. Even when the mazurka appears after this maelstrom of notes, it is embroidered with gentle decorations. The five variations and coda that follow are fairly ingenious in how they approach this music. Though they follow the usual pattern of variations of that time (a few fast variations, a slow variation, often in the minor key, leading to a very fast finale), Chopin’s music called for more ingenuity than the usual popular opera melodies. For me, Kalkbrenner has created an entertaining work several notches above the common fare of the day.

Tyler Hay impresses me immensely. He is a prize-winning product of the Purcell School, the Royal Northern College of music and the Royal College of Music. He has studied with Graham Scott, Frank Wibaut and Niel Immelman. His technique is more than a match for everything on offer here, and he combines this with a subtle sense of rubato, a strong stylistic sense and real engagement with the music. I hope to hear more of him.