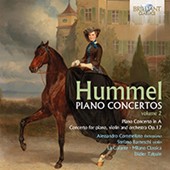 In the olden days, this is precisely the sort of disc I would discover triumphantly, and carry off to the till with a frisson of excitement (particularly at Brilliant Classics’ bargain prices.) I would know I would like it because I’ve loved the much neglected Hummel since that ground-breaking Chandos Stephen Hough disc of 1987 (CHAN8507), and I like the sound of original instruments and a fortepiano in these concertos of the late eighteenth and early nineteenth centuries. I treasure the Brilliant set of Haydn piano trios by the Van Swieten Trio (92794) which I picked up for a song somewhere in France, where record stores still exist. Hummel, of course, was Haydn’s successor at Esterhazy.

The disc under discussion here appears to be volume 2 of what may turn out to be a complete set of ten concertos (plus, hopefully, four Rondos, a Fantasia and three sets of variations) performed by the fortepianist Alessandro Commellato, conducted by Didier Talpain, with two different orchestras – La Galante and Milano Classica (though two or three of the musicians are in both orchestras.)

Such has been the neglect of the man once mentioned in the same breath as Mozart, Beethoven and Chopin that the concerto in A major, WoO 24a S.5, his second, was only rediscovered in the 1960s among the papers of Maria Hummel (a descendent) in Florence. It also bears the inscription “not to be published” which I think can be safely ignored.

At the age of just seven, Hummel went to live with the Mozarts for a couple of years (Constanze described him as a foster son), and the influences are obvious (though of course both were drawing from a common eighteenth-century style). The A major concerto opens with foreboding chords, and for a moment you could be in the world of Mozart’s K466. But Hummel doesn’t go as deep or as dark as Mozart (which is probably why his works were quickly dismissed after his death by later, romantic musicians.) Instead, there are some wonderful melodies, martial excitement and quite a lot of flash – cascades of notes and florid ornaments.

The recording lacks air, but is more than adequate. It’s a particularly good recording of the fortepiano, an 1825 instrument by Böhm, which seems to me more substantial and less honky-tonk than some.

There is a surprise to be had in the second work on this disc, the Concerto for piano and violin Op.17, which starts in the world of Mozart’s K453. In the third movement rondo, Commellato presses a special pedal on the fortepiano to produce what sounds like Turkish percussion, the so-called “janissary” stop. The sound is better – much more airy -- in this work.

Alas, commercial pressures have reduced the record collectors’ serendipity, and few stores are left in which you might pick up this disc. You would now have to choose this disc specifically – and if you were going to have to order this disc anyway, and you can raise £49, you might as well send away for the 20-CD set of the Hummel edition (Brilliant 95792). That box of delights has already been reviewed and recommended on this very website. Enjoy.