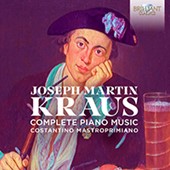 The portrait which adorns the cover of this CD shows the nineteen-year-old Kraus in a striking pose, looking straight at the viewer in an open-necked shirt, smoking an elaborate pipe and resting his arm on a heart-shaped cushion. Painted in 1775, it depicts both confidence and yearning, as well as creative potential. After studies in Germany, Kraus emigrated to Sweden and made a name for himself at the court of Gustav III as an opera and ballet composer. Sadly, he died from tuberculosis in 1792 (a year after his exact contemporary Mozart) aged just 36. Little of his keyboard music survives, just two sonatas and six other pieces. The Sonata in E major dwarfs the rest: it is a large-scale work in four movements, concerto-like in its ambition. The first movement, despite being in a major key, is very much a Sturm und Drang piece, showing perhaps some influence from C. P. E. Bach in its quickly changing moods. The second and third movements continue this fantasia-like approach with extreme contrasts, in a very effective proto-Beethoven style. The sonata finishes with a set of variations on a jaunty march, showing the full potential of the variation form, as Kraus does in the other Sonata and in a stand-alone extended set of variations on a hunting theme, thought to have been composed in London in 1785. There is also a single (sadly) Swedish dance. Mastroprimiano is a sympathetic interpreter of the music, bringing out its expresiveness and quirkiness, without overexaggeration and with lots of nuance. He plays on a copy by Monika May of a 1781 Stein fortepiano, contemporary with the music, which is very well recorded. There is an endearing quality to Kraus’s music, and it serves as a reminder that Vienna was not the only centre capable of producing good quality keyboard output. On the evidence of this welcome recording, it is a pity that more has not survived.