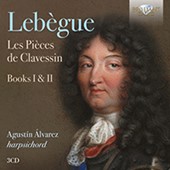 Jacques Champion de Chambonnières (1601/02-1672) is generally considered the founder of the French harpsichord school. Among the composers for keyboard of the next generation - some of whom were his pupils - Jean-Henry d'Anglebert (1629-1691) and especially Louis Couperin (c1626-1661) are the best-known and are well represented on disc. In comparison Nicolas Lebègue has received much less attention. Today he is best known for his organ music. He published three books with organ works, and in addition a number of pieces have been preserved in manuscript. However, he also left a substantial oeuvre for harpsichord, and this is the subject of the present set of three discs released by Brilliant Classics.

Lebègue was born in Laon, northeast of Paris; we know nothing for sure about his early education, but he may have been introduced to the organ by Jacques Blanchette, organist at Notre-Dame-de-Laon. His reputation must have risen quickly as in 1661 he was already called "the famous organist from Paris". From 1664 until his death he was organist at St Merri. In 1678 he became one of the four organistes du Roi, alongside Nivers, Thomelin and Buterne. He was not only famous as an organist, but also as a composer, a teacher and an expert in organ building. He often advised church authorities across the country when a new organ was to be built. Among his pupils we find some famous organists of the next generation, such as Nicolas de Grigny, François Dagincourt and Nicolas Geoffroy.

Lebègue also performed as a harpsichordist at the court. In this capacity he "was renowed for qualities of finesse and good taste", according to Augustín Álvarez in his liner-notes. The fact that he was held in high esteem is reflected by the number of copies of his keyboard works, both for harpsichord and for organ. Five books with keyboard music were published: two with harpsichord pieces and three with organ works. In 1677 Les Pièces de Clavessin were printed, including 51 pieces, and in 1687 the Second Livre de Clavessin came off the press, with 44 pieces.

In the first book the pieces are grouped according to key, beginning with a prélude non mesuré. These were the first of this kind to be published in France. The booklet includes a letter by the composer regarding the performance of such preludes which attests to the fact that this was a relatively new phenomenon which needed some explanation. The preludes are followed by various dances, such as allemande, courante, menuet, sarabande and gavotte. There is no fixed order nor a fixed number for the five sets of pieces. Some dances are extended by a double and some titles have an additional reference to their character, such as sarabande grave or courante gaye. The chaconne was to become one of the most popular forms, both in instrumental music and in opera, but Lebègues first book includes just two.

In the second book we find three chaconnes, including a petitte chaconne (Suite in G), and another piece based on a basso ostinato, a passacaille (Suite in g minor). In this book the word suite is used for the first time in French harpsichord music. The pieces are divided into six suites of various length and structure. Préludes non mesurés are entirely omitted. Every suite opens with an allemande, and includes a courante, a sarabande and a gigue, in that order. This was to become the basic structure of any suite. Every suite includes some additional dances, such as a menuet or a gavotte. The Suite in G contains an Air de hautbois which could be a transcription of a piece from an opera. That would be an early example of a practice of which Jean-Henry d'Anglebert was the most pronounced exponent. This same suite also includes another novelty: for the first time a rondeau makes its appearance in a book of harpsichord pieces.

Considering that Lebègue's harpsichord oeuvre is little known, the importance of this release can hardly be overestimated. It is not the first complete recording: the American harpsichordist Karen Flint recorded Lebègues two books on Plectra (2014), but discs on this label seem not that easily available. Agustín Álvarez is not only a harpsichordist, but also studied baroque dance and is actively involved in performances of music and dance. No wonder that the dance rhythms were particularly important to him. "In recording the Pièces de clavecin I have aimed to approach it not only as a musician but also with dance in mind, attempting to understand the conventions of the time, lost to us now, which linked music and movement, and of which Nicolas Lebègue reveals himself to us as a consummate master." This explains why the dance rhythms are so well realised here, with the help of a clear articulation, making the listener really feel them. The préludes non mesurés have the right improvisatory character. The chaconnes and passacailles also belong to the recording's highlights, as Álvarez keeps them going - and that is one of the fascinations of this form. He plays a beautiful instrument by Andrea Restelli, which is a copy of a 1769 Taskin, preserved at the Raymond Russell Collection in Edinburgh. The pitch is a=392 Hz, the temperament is called "early French".

This production offers lovers of the harpsichord the perfect opportunity to add a substantial oeuvre to their collection.