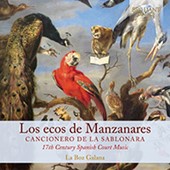 In 2011, Naxos released the first disc in a series, devoted to Spanish secular vocal music of the 17th century, generally known as tonos humanos. To date, five discs in this series have appeared, which included songs from the so-called Guerra manuscript, dating from around 1680. The disc under review here brings us to the early stages of this genre. The songs are taken from the Cancionero de Sablonara, a songbook which includes 75 polyphonic songs, written for the royal court of Madrid in the first decades of the 17th century. Its name comes from Claudio de la Sablonara, copyist and archivist of the Royal Chapel. He presented it to Wolfgang Wilhelm, Count of Nuremberg and Duke of Bavaria, who was in Madrid from 1624 to 1625. This saved the collection from the fire which destroyed many manuscripts in the Real Alcázar in Madrid in 1734. This songbook is preserved in the State Library of Bavaria, and because of that is also known as Cancionero de Munich.

The tonos humanos which are the subject of the Naxos discs, are for solo voice and basso continuo. The present disc includes only songs for two to four voices with accompaniment for a plucked instrument, either guitar or harp. They were performed by the musicians which Philip IV had at his service. The pieces performed here show the gradual shift from the style of the 16th century to that of the 17th, partly influenced by musical developments in Italy. However, the monodic style of the Guerra manuscript is absent here.

As one may expect, most songs are about love, and the authors of the texts use different images to describe the various aspects of it. Barquilla pobre de remos by Gabriel Díaz is about a boat at night, transporting Galatea. Desde las torres del alma by Juan Blas de Castro uses the image of war: "From the towers of the soul, besieged by a thousand deceptions, reason is calling the sleeping conscience. To arms, to war! Disillusions, love leads my tender years here". This song has some theatrical traits, which suggests that it may have been intended for a performance in the theatre. Ricos de galas y flores refers to nature: "Rich in finery and flowers, October and September follow April and May's flowery, verdant meadows". Unhappy love is expressed in Álvaro de los Ríos's Sin color anda la niña: "Pale is the maiden after having lost her lover". The texts are often from the pen of some of the main poets of the time, such as Lope de Vega and Francisco de Quevedo.

Some songs are based on the Folia, such as Pajarillos suaves by Álvaro de los Ríos and Romerico florido by Mateo Romero. The latter is also the composer of the seguidilla Bullicioso y claro arroyuelo. A seguidilla is a dance song of a popular nature, with lively rhythms. Another specimen of this genre is the anonymous De tu vista celoso, which includes the echo effects that were so popular in the early 17th century. It is also the best-known piece in the programme, thanks to Jordi Savall, who over the years frequently performed it with his ensembles.

Most of the composers may be unknown quantities for most music lovers. Gabriel Díaz was for some years vicemaestro de capilla of the Royal Chapel, Diego Gómes was connected to the court as an instrumentalist. Álvaro de los Ríos worked for several members of the royal family as a chamber musician, probably a singer who accompanied himself at the guitar. Mateo Romero is the odd man out in the programme, as he was not Spanish by birth. He was born as Mathieu Rosmarin in Liège in the southern Netherlands. In 1585 he moved to Madrid, where he joined the Capilla flamenca, one of the two vocal ensembles employed by Philip II. Juan Blas de Castro, who was a close friend of Lope de Vega, entered the service of Philip II and served his successors as a singer and player of plucked instruments. Bernardo Clavijo del Castillo was a keyboard player who was appointed court organist as successor to Hernado de Cabezón, the son of the famous Antonio. His Tiento lleno de 2° tono is a specimen of one of the most common genres of keyboard music at the time. Miguel de Arizo was a pupil of Díaz and entered the royal chapel after his voice broke. Lastly, two composers who were not connected to the court. Joan Pujol was born and died in Barcelona, where he also acted as maestro de capilla at the Cathedral. In between he also worked in this capacity in two other towns. He was one of the most prolific composers of sacred and secular music of his time in Spain. Manuel Rodrigues Coelho was Portuguese, and was educated as a keyboard player. Susana grosada is a set of diminutions on Orlandus Lassus's famous chanson Susanne un jour.

It is regrettable that the booklet omits any information about the composers. It does include English translations of the lyrics, but not the original texts. These are available at the Brilliant Classics site for download. These things are little blots on an otherwise outstanding production. On the basis of my experiences with later tonos humanos as well as songs from earlier songbooks, I expected to hear some fine music, and I was not disappointed. Those who have heard the performances of such music by ensembles like Hespèrion XX are in for a surprise, as these interpretations by La Boz Galana are more restrained and introverted. No battery of instruments, no percussion instruments - just four singers and a couple of plucked instruments. This allows to focus on the texts and the way composers have set them. It is up to the singers to explore the rhythms, and they do so perfectly, effectively supported by the two instrumentalists. It is all very well done. Only recently I reviewed another disc by this ensemble, which I liked a lot, and this recording confirms my positive impressions.

This is a most enjoyable disc. A Boz Galana is an ensemble to keep an eye on, and I am looking forward to future projects.