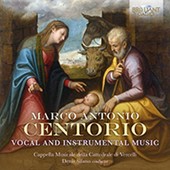 Here’s a recording that eluded my Christmas 2020 net. It’s one of two recent recordings of Centorio’s music that Father Silano and his choir have made: there’s also an album of his motets, hymns and antiphons with music by Pietro Heredia on the Elegia label (ELECLA19070, download only, or stream from Naxos Music Library). There’s also music by Centorio on a collection of works for the Jubilee of 1600 on Stradivarius STR33533, download only or stream from Naxos Music Library, with music by Merulo and Anerio. Both of those also include music for Christmas; Anerio’s Dialogue of the Shepherds at the crib of our Saviour is the major work on Stradivarius, where the performers are Accademia del Ricercare and Pietro Busca.

I can’t claim any hitherto undiscovered masterpieces here, but Centorio’s music on all three recordings is attractive, often very attractive. He seems to have been active in the early 1600s and, while the music retains some of the older style of Palestrina et al., he was also influenced by the new style of Monteverdi and his contemporaries. All the music is sacred, except the opening la Centoria and the four canzoni francese, which are instrumental pieces based on secular tunes. None of the music was published, so it has all been edited from manuscript sources by Monsignor Silano, who directs the performances. All of it, apart from the pastoral dialogue Vigilate pastores, is receiving its first recording.

Father Silano and his choir rise to the occasion convincingly, at a level or two above what you might expect from most provincial Italian choirs. It consists of ‘musicians specialized in performing early music and a select group of amateur singers [who] perform at liturgical services in Vercelli Cathedral’. It’s a mixed choir, as is apparent not only from the photographs in the booklet but also from the occasional over-prominence of some slightly less than elegant singing on the top line. Nothing, however, to put the listener seriously off balance, and some of the pieces receive exemplary performances, albeit with a touch more vibrato than we believe would have been regarded as ideal.

One of the sopranos in Hodie cantant angeli sings with the kind of purity of tone that one associates with Emma Kirkby. On the other hand, the young Gianluca Pisa, a member of the children’s choir Collegio degli innocenti, who sings the solo in Spargite flores (track 11) deserves special praise for a good effort that doesn’t quite hit the right spot. The singing of four of the voices in the final 5-part Laudate pueri rounds off an attractive, if not flawless, accomplishment.

The singing on the Stradivarius recording is somewhat more secure. I don’t have any details of the vocal soloists – no notes with the download or streamed version, so I can’t even give a recording date other than © 2018 – but the Accademia del Ricercare have received a good deal of praise in these pages for their various recordings for Brilliant Classics. Even Naxos Music Library, usually a reliable source of a pdf booklet, offers only the rear insert of the CD.

The booklet contains plenty of information about Centorio, who was unknown to me, but no texts, so only 5/10. At least, the Elegia recording includes the texts, but no translations, so 7/10. The Stradivarius download is innocent of the booklet, so 0/10 there.

For all my reservations about these three recordings of Centorio’s music – none of them too serious – the Brilliant Classics is a good place to begin to get to know him. Next stop, perhaps, the Stradivarius recording.