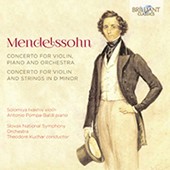 No, not that one. This is the violin concerto Mendelssohn wrote when he was thirteen.

According to Wikipedia, "The Concerto for Violin and String Orchestra in D minor was composed by Felix Mendelssohn" around 1822. "It has three movements, Allegro–Andante–Allegro, and performance duration is approximately 22 minutes. Mendelssohn was considered by many of his time to be a prodigy comparable only to the young Wolfgang Amadeus Mozart. Besides being a brilliant piano virtuoso, his composition took a firm step forward in musical development. In the period when this concerto was composed, Mendelssohn composed twelve string symphonies. At the age of eleven, he had written a trio for strings, a violin and piano sonata, two piano sonatas, and the beginning of a third, three more for four hands, four for organ, three songs (lieder), and a cantata." And, of course, it would only be a few more years before he wrote the Overture to A Midsummer Night's Dream.

"Mendelssohn wrote the concerto for Eduard Rietz (eldest brother of Julius Rietz), a beloved friend and teacher." However, "nobody ever performed it in Mendelssohn's own day, and it was only in 1952 that Yehudi Menuhin exhumed and premiered it." Today, we have several recordings of it, although I doubt that any of them, including this one under review, will help usher the concerto into the basic classical repertoire. While it is certainly pleasant and has much to commend it, it never rises to the level of maturity or musical accomplishment of the more-famous Violin Concerto in E minor, which the composer premiered in 1845. Still, this recording might be worthwhile if only as a musical curiosity.

Violinist Solomiya Ivakhiv handles the solo part with a graceful ease that well captures the youthful spirit of the work. The melodies may not be as soaring or memorable as the ones he would later write, but they are sweet and soothing, qualities Ms. Ivakhiv expounds nicely. Under the leadership of Maestro Theodore Kuchar, the Slovak National Symphony Orchestra sounds as polished as ever, and Ms. Ivakhiv is appropriately expressive, lyrical, and, in the final movement, exuberant. I've heard this concerto played by four or five different violinists over the years, and none of them impressed me as much as this one. Maybe I'm just getting used to the music, or maybe Ms. Ivakhiv has given it just the right touch of sensitivity.

The album's coupling is another early work, the Concerto for Violin, Piano and Orchestra, which Mendelssohn wrote in 1823. It received one private and one public performance but was never published in the composer's lifetime. And it, too, had to wait until the 1950's to receive a revival. Interestingly, Mendelssohn originally wrote it for only a string accompaniment but later added parts for wind and timpani, which we hear on this recording.

I could not remember having heard this duo concerto before and rather enjoyed it, perhaps more so than the early violin concerto alone. There is a grand sweep to the first movement that is invigorating, and the interplay of violin and piano is often a delight. The duo concerto is much longer than the early solo concerto, too, giving it a bit more substance and the soloists more room to maneuver. Then, too, Mendelssohn gives each of the instrumentalists little solo flights of their own from time to time, which add to the work's poignant charm. Another vivacious finale closes the show in rigorous fashion.

Producer and engineer Jaroslav Stranavsky recorded the concertos at The Fatra House of Art, Ziliny, Slovakia in November 2017. The orchestral sound is big and warm but without much depth. When the violin enters in the first concerto, it is well positioned and notably clearer, better detailed than the orchestra. As things progress, however, any minor qualms disappear, and we begin to appreciate how well the soloist and orchestra work together. The sound may be slightly soft, but it tends to fit the music in any case. In the second of the concertos, with both violin and piano, the two soloists appear a little too close for my taste and tend to dwarf the orchestra.