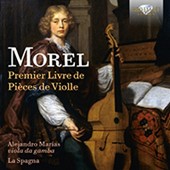 to buy this CD on amazon.co.uk

A pupil of the great master of the viol, Marin Marais, to whom he dedicates his Premier Livre de Pièces de Violle of 1709, Morel has sunk into almost complete obscurity to the extent that his exact dates of birth and death are unknown. He takes the distinctive world of French music for the viol into the next generation, developing on the virtuosic and highly decorative style of Marais and others, while providing his Suites for Viol and continuo in score form rather than only in separate parts, suggesting perhaps that their increased complexity demanded that each of the three players needed to know exactly what the others were doing at any given moment! He also began to organise the various dance movements into more coherent sequences, avoiding duplication and marking an advance in the direction of the high Baroque Suite with its expected set of dance forms in a predetermined sequence. This more ordered approach to viol composition is apparent in these superbly expressive recordings by La Spagna, Alejandro Marías (solo gamba) and Pablo Garrido and Jordan Fumadó, (continuo gamba and harpsichord respectively). Marías’ accounts of the four Suites (three of which are world premieres!) are thoughtful and compelling, with a fine sense of the overall structure and lyrical charm of these varied and inventive works. For the concluding Chaconne, the only piece by Morel to be regularly performed nowadays and ironically one of the less imaginative pieces on the CD, the ensemble is joined by flautist Alvaro Marías.