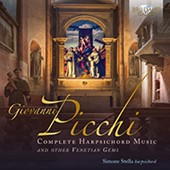 Giovanni Picchi (1572-1643) is best known to harpsichordists for a single fine toccata which was copied into the Fitzwilliam Virginal Book in the early 1600s. He was organist at the church of the Frari in Venice from the mid-1590s until his death and later concurrently held the same post at the Scuola di S. Rocco. As well as a print of instrumental canzoni and a single motet, fourteen dance pieces for keyboard survive and are included on this recording. To fill the space, a representative sample of other Venetian keyboard music is also included, featuring toccatas, ricercars and canzonas by Annibale Padovano, Claudio Merulo, Andrea and Giovanni Gabieli and Vincenzo Bellavere. All this provides a rich illustration of what was being played in Venetian salons in the late 16th and early 17th centuries. For Picchi, it is a pity that we have only that one toccata which shows a singular intelligence at work, as well as providing the performer with opportunities to be creative. His dance music has its moments but inevitably relies a lot on repeated chord progressions and figuration. Stella does his best to bring some characterisation to the different dances, some of which are labelled ‘alla Polacha’, ‘alla Ongara’ and ‘Todescha’, while providing the necessary constant rhythmic pulse. He plays on a copy of a harpsichord by the Sicilian Carlo Grimaldi, made by Roberto Marioni. It suits the range of music recorded here very well, sounding almost virginal like, and allowing Stella to bring out the voices very clearly in the contrapuntal music. Perhaps inevitably, Giovanni Gabrieli’s three pieces at the end of the recording shine through most strongly – all three are classics (the Fuga IX tono, Ricercare del VII/VIII tono and the keyboard arrangement by Girolamo Diruta of the canzona La spiritata). Stella has recorded and engineered the CD himself with excellent results, apart from leaving rather long gaps between the tracks. There are some endearing Italianisms in the English liner notes, but they are informative, and the overall project is very much to be welcomed.