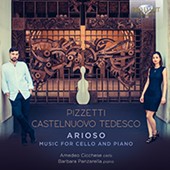 It cannot be said that instrumental music was neglected in the 19th century, yet for many years opera dominated the public idea of what it meant to be an Italian composer. Ildebrando Pizzetti was one of the generation, alongside Ottorino Respighi and Alfred Casella and others, that challenged that conception and guided their creativity in other directions. Pizzetti evidently passed this to his pupil Castelnuovo-Tedesco, who took the idea and ran with it. He produced a huge body of works in all genres; just a quick glance shows sonatas for oboe, trumpet, viola and bassoon, concertos for piano, harp, oboe and violin, as well as many works for guitar, for piano and for violin.

Pizzetti was born in Parma in 1880. From 1895, he studied at the Parma Musical Conservatorium after a brief dalliance as a playwright. He remained there as a student until 1901, producing several large-scale works in that time. Here he was introduced to contemporary music of all genres. Some 13 years later, he co-founded a journal of modern music called Dissonanza. On the strength of the music here, however, he was largely writing in a late-romantic idiom. The first of the three Canti has echoes of Franck's Violin sonata in A in its opening bars but is not as clear-cut in its melodic outline. It certainly lives up to its Affetuoso: its short span contains large dramatic gestures. All three pieces have lots of interplay between piano and cello, with short melodic motifs rather than full tunes. They are beautifully lyrical nonetheless, and have some impassioned writing for both instruments.

The Cello Sonata dates from the same period and has some of the same feel but I did not find it as approachable; the writing is starker and bleaker. There are many moments of tenderness and light but they always seem to lose headway against the prevailing dark mood. The first movement is based on two short melodic fragments. The first is introduced by the piano in the opening bars; this is simply a three-note descending phrase based on the notes of the key chord of F major. The second is longer and has something of the feel of a gregorian chant. It appears in counterpoint with the opening theme soon after the long lines of the cello’s first entry. As the movement progresses, this second theme brings a somewhat unsettling quality to the music as it pulses away within the texture. The central section, a gradually building impassioned dialogue, is interrupted by a curiously playful fanfare in the piano, heard nowhere else in the movement. It reintroduces the passionate music that has gone before but now there is a sense of uncertainty, and the mood quietens this time. The movement ends in reflective mood with an undercurrent of unease. This unease continues into the fast second movement. The fast disjointed running passages in the piano form the foundation for the cello’s choppy rhythms. The halting melody in the upper reaches of the instrument only emphasises the pleading quality of the music. The texture clears to an austere funeral march that almost seems to find peace before the semiquavers of the opening intrude, and all the cello can do is cry out its anguished calls as the movement ends. The third movement opens with a very long passage for solo cello – almost a third of the final movement. The indication here is stanco e triste (tired and sad), and there is certainly feeling of resignation. Somehow this mood begins to change, resignation to acceptance, and the work ends in tranquility.

Florence-born Castelnuovo-Tedesco studied with Pizzetti, and was mentored by Alfredo Casella. His music was taken up (and commissioned) by the great and the good of the musical world, amongst them Gregor Piatigorsky, Andrés Segovia, Arturo Toscanini and Jascha Heifetz. It was with the help of the latter that he managed to escape to the United States just prior to the outbreak of World War II. In America he had a successful career as a film composer, with over 200 film scores to his credit. He went on to teach the likes of Henry Mancini and John Williams.

The Cello Sonata was written just a few years after Pizzetti’s but is in a very different style. Its pastoral opening movement ably demonstrates Castelnuovo-Tedesco’s gift for melody. The booklet points out the appearance of Don't cry for me Argentina in the last few bars of the movement. The second movement theme and variations are short and full of humour. The theme is jaunty but with a touch of melancholy, whilst the variations are all dance-like. A tarantella kicks off proceedings followed by variation with the feel of a Jewish or Hungarian rhapsodie. A country waltz is next and then a stiff, uncertain march with, to my mind, the braying of a donkey. The finale starts off in vaguely fugal style but soon settles into a rambunctious dance, which in its turn gives way to the courtly dance that closes the work.

Castelnuovo-Tedesco made three transcriptions of Rossini’s Largo al factotum from The Barber of Seville”: two for violin with piano and orchestra respectively, and the third that is played here, written for Gregor Piatigorsky in 1943. Like the Sonata, it is full of humour and makes the most of the material. Nor is it a vehicle solely for the cellist; both instruments are equal partners in the magical-mystery tour that is created out of Rossini’s aria.

The young Italian soloists here are wonderful, full of fire, passion and character. Cicchese was appointed by Gianandrea Noseda as the principal cello with the Orchestra del Teatro Regio in Turin, and has worked with conductors such as Muti, Abbado and Eschenbach. Panzarella has studied and recorded with Carlo Grante, though since 2008 she has specialised in chamber music. They are both marvellous advocates for this music.