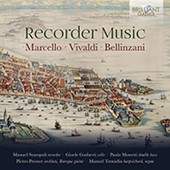 Every year several discs with music for recorder are released. Sometimes they include pieces which are originally intended for the recorder, but performers also regularly turn to music for transverse flute or violin which they adapt for their own instrument. This is often justified by the apparent lack of original recorder music. However, this seems a little exaggerated. The present disc focuses on two collections of twelve sonatas each, originally conceived as recorder sonatas, and whereas the sonatas by Marcello are available on disc in several recordings, those by Bellinzani are hardly known and - as far as I know - have been recorded only once before.

Benedetto Marcello was born in a versatile family, his father being both a violinist and a politician (he was a senator of the Venetian government), while his mother was an artist and a poetess. It is perhaps under her influence that Benedetto valued poetic use of words very highly. Like his father he wasn't a man of just one profession: apart from being a musician he was active as a lawyer, administrator, philologist and writer.

Marcello's first publication was a collection of concertos which appeared in 1708, and from which Johann Sebastian Bach took one piece to transcribe for keyboard (BWV 981). The twelve sonatas for recorder and basso continuo, three of which are played on this disc, were published in Venice in 1712. The popularity of this collection is proven by the fact that they were published again the same year by Estienne Roger in Amsterdam. And as late as 1730 John Walsh in London published these sonatas in a transcription for the transverse flute, which had replaced the recorder as the most fashionable wind instrument.

Marcello's aethetic ideals are summarized by the title of a collection of fifty Psalms on Italian texts: Estro poetico armonico. He was praised for "strength and regularity of design", and "noble simplicity". This simplicity was a feature associated with 'early music', meaning the music of the 16th and early 17th century, which Marcello was strongly interested in. That does not mean that these sonatas are very simple or that they are devoid of contrast and dramatic features. There are quite some melodic twists and turns, for instance in the movement which closes the Sonata No. 6, with the character indication a tempo giusto vivace. Marcello's collection ends with a series of variations on a basso ostinato, a ciaccona. This was an ideal vehicle for a performer to show his skills, and it is no surprise that several collections of solo or trio sonatas end with such a piece. Arcangelo Corelli had set the example with his violin sonatas Op. 5. Antonio Caldara closed his trio sonatas Op. 2 also with a ciacona.

Antonio Vivaldi concluded his set of trio sonatas Op. 1 with variations on another ground bass, the Folia. So did the other composer on this disc: Paolo Benedetto Bellinzani. He was born in Mantua or Ferrara, lived and worked for some time in Udine and Verona, then in Ferrara, Pesaro, Urbino, Orvieto and lastly in Recanati, mostly in the position of maestro di cappella at a cathedral. The connection between Bellinzani and Venice is rather limited: Udine was under the rule of Venice, but Bellinzani worked there only three years, and when his Sonatas Op. 3 were printed in Venice in 1720, he had already moved elsewhere.

His extant oeuvre comprises sacred music, duets and madrigals as well as two collections of instrumental music. The second of them comprises trio sonatas "in imitation of Arcangelo Corelli". This bears witness to the influence of the Roman master on composers of the next generation, including Marcello and Bellinzani. The latter's sonatas for recorder are technically more challenging than those by Marcello. It is notable that the composer wrote out the ornamentation in some of the slow movements. Every sonata comprises four movements in the then common order. However, the twelfth sonata is different: the second movement is followed by one for harpsichord solo, serving to "the breath of the flute". It is probably meant to save the recorder player's breath for the closing movement, the variations on La Folia. This movement is quite long: it takes a little over eight minutes in this recording.

As a kind of 'bonus', although placed in the centre of the programme, is a rather curious piece by Vivaldi. That is to say, the original composition is from his pen: the Concerto in a minor, op. 3,8 (RV 522). Here we get an anonymous arrangement for recorder and obbligato harpsichord. The liner-notes don't give any information about where it has been found. They do say how it is performed: "[This] version was further enriched from us [sic], by the presence of the cello and the violone, which give a greater orchestral effect with their fullness." This seems a mistake to me. The two bass instruments have too much presence, sometimes overshadowing the harpsichord, which is particularly unlucky, as this instrument is supposed to play a leading role here. Pieces of chamber music with an obbligato part for the harpsichord are rather rare in Italian music of this time, so it would be interesting to hear it as it was meant by the arranger.

That said, recorder aficionados will certainly enjoy this disc. Manuel Staropoli and his colleagues deliver fine performances, although sometimes I would have liked stronger dynamic differences between good and bad notes. The inclusion of sonatas by Bellinzani is of particular importance, as they deserve more attention than they have been given so far.