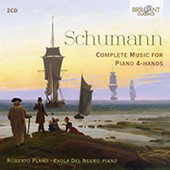 As a Schumann enthusiast I welcome these two discs of his less familiar music. The decrease in popularity of the piano-duet medium (at least as a live experience) is partly to blame for the neglect of a sizeable quantity of fine music. Mozart, Schubert, Brahms, Dvořák, Chabrier, Debussy, Ravel, Fauré, Rachmaninov, Poulenc, Hindemith, Barber and Kurtág all composed for the 4-hands combination and there are many masterworks in this repertoire. Thankfully CDs fill in the gaps here and in numerous other neglected areas of music.

Nobody should imagine that these Schumann pieces are trifles or insignificant works, unworthy to be seriously considered as representative of his genius. The Bilder aus Osten (Pictures from the East) are probably the best-known works here. Sub-titled Six Impromptus, they were Robert's Christmas surprise for Clara in 1848. This superb set was inspired by the Makamen des Hariri, Rückert's translation from the Arabic of a medieval epic recounting the adventures of Abu Seid and his friend Hareth. Another Oriental subject (specifically, Persian mythology) had inspired Schumann to compose Paradise and the Peri, based on Thomas Moore's Lalla-Rookh, five years earlier, but I think most of us will listen in vain for any exotic influence in Opus 66. There are so many Schumann masterpieces for piano that it is not surprising the less familiar keyboard pieces – the Opus 5 Impromptus, for instance, or the 8 Novelletten – are imagined to be minor works of little account. The first of the Bilder aus Osten tells us that this is quality Schumann (as reference points, the Second Symphony Opus 61 and the First Piano Trio Opus 63 both date from the previous year.) The expressive range of these six impromptus is as wide as we would expect from the mature composer. The simplicity of No 4 is beautiful and haunting. Only a genius could write a piece so innocent while avoiding banality. For magical playing here one must turn to Richter and Britten (Music and Arts, live from Aldeburgh in 1966), but nevertheless the married couple Robert Plano and Paola Del Negro are admirable throughout these CDs. There is also a (quite old?) recording of András Schiff and Peter Frankl, part of a 3-CD box set, which I have not heard. To summarise, I totally disagree with the one or two writers who are dismissive of Bilder aus Osten. They are not only immediately attractive but are also increasingly satisfying with repeated listening.

The Eight Polonaises on Disc One date from Schumann's eighteenth year and are extraordinarily characterful and varied. They represent a homage to Schubert, his own polonaises in particular. Already the striking changes of mood so typical of Schumann's mature compositions – especially for piano – are evident. It is always a test of a composer's inventiveness to write a set of minuets, waltzes, polonaises, etc. Here Schumann meets the challenge supremely well, each polonaise is clearly characterised and occupies its own expressive world. Some are based on driving rhythm, while others are much more lyrical. They are all in ternary form, the middle section of each one providing a refreshing contrast.

In the booklet notes the two pianists describe the music on these discs as “small or great masterpieces that have, alas, largely been forgotten.” At first that may seem an overstatement but I suspect many listeners will be as surprised as I was. Many of these pieces become, to use the trendy expression, earworms.

The Twelve Klavierstücke für kleine und grosse Kinder, Opus 85, another delightfully varied collection, include a Bear Dance – a strange, captivating piece which one would not readily ascribe to Schumann – a Kroatenmarsch, a moto perpetuo - At the Fountain, and a Tournament March. No 4, Beim Kränzewinden, includes a snatch of melody familiar from the wonderful Konzertstück for four horns, Opus 86 (also 1849).

Ball-Szenen, Opus 109 (“Nine Characteristic Compositions”) and Kinderball, Opus 130 both date from the last few years of Schumann's life. Opus 109 was “intended for talented amateurs”, Opus 130 “for aspiring children”, to quote John Daverio, but nevertheless some pieces are considerably more taxing than others. No 2 of Opus 109 and No 1 of Opus 130 are two more Polonaises (as is the finale of the Violin Concerto of 1853 – evidently Schumann had not tired of this dance-genre), while there are also movements entitled Ungarisch (very fiery), Française, Mazurka (of splendidly grand character), Ecossaise and Walzer (two of them).

Although there are forty-two pieces here, such is the range of Schumann's imagination that I can honestly say a complete play-through of the two CDs does not feel dutiful. To say that I found this music consistently engaging would be an understatement. To add to its virtues, this excellently performed and recorded collection is also an outstanding bargain.