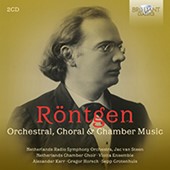 "Röntgen's compositions, published and unpublished, cover the whole range of music in every art form; they all show consummate mastery in every aspect of technique. Even in the most facile there is beauty and wit. Each series of works culminates in something that has the uniqueness of a living masterpiece."

Donald Tovey’s obituary in The Times paid tribute to a composer he greatly admired. Having trained in Leipzig, Röntgen built his career in Amsterdam, with academic life alongside his creative work; and having retired from his formal duties, his final ten years were astonishingly prolific, bringing the completion of around half of his formidable list of some 600 compositions.

As Tovey said, Röntgen worked in every genre, so this two-disc compilation from Brilliant Classics makes a useful introduction to his art. However, recordings of his music are not exactly rarities, and the chamber music especially is quite well represented on disc. It also rather dominates this collection, with three substantial pieces on the second of the two discs: a piano trio alongside duo sonatas for violin and cello. Here and elsewhere one is struck by the naturalness and fluency of Röntgen’s technique; every note is in its right place and instrumental balances seem almost effortlessly effective. If those are the priorities that come to mind, it does suggest that the works themselves are not always arresting and powerful in the impact they make.

In that sense it is the first disc that offers the more immediate rewards. The Septet for wind instruments makes for an appealing beginning, with some excellent playing by the members of the Viotta Ensemble. The individual players take their solo opportunities with aplomb, while the ensemble playing is no less satisfying. The Theme and Variations for piano duet also dates from the 1870s, its single movement sweep skilfully presented by Wyneke Jordans and Leo van Doeselaar.

The Netherlands Chamber Choir offer assured performances of the group of three Motets, which all date from the 1920s but were composed separately rather than as a single unified work. Röntgen composed eight motets in all, very much modelled on the similar great works by his hero Brahms. They are elaborate, ambitious pieces, and while the booklet notes are thorough enough and cover all the repertoire, it is to be regretted that the texts and translations are not included.

Röntgen wrote 24 symphonies across a span of more than fifty years, but all save the first three date from the final decade of his life. The example recorded here is No. 8 in C sharp minor, dating from 1930, which is presented by distinguished performers: the soprano Roberta Alexander and the Netherlands Radio Symphony Orchestra conducted by Jac van Steen. A single movement of some fifteen minutes and featuring a part for wordless soprano, it has some beautiful combinations of sound, but does not attempt a strongly projected symphonic direction and personality. The recording is variable, since it is atmospheric enough but the more exposed passages for the soprano sound as if they come from a different acoustic.

This set offers some rewarding introductions to a composer who was immensely skilled at handling different musical genres, and the subtleties of his inventiveness unfurl more rewards with each hearing.