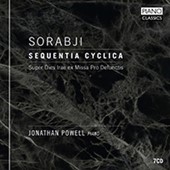 Kaikhosru Shapurji Sorabji (1892-1988) was the composer of some of Western classical music’s most intricate, extended, and ambitiously virtuosic works to date. His output encompassed seven decades, from 1914-1984. The serial composer Milton Babbitt, often himself described as the creator of tremendously difficult pieces, ranked Sorabji, alongside Brian Ferneyhough, as the most complex composers of the Twentieth century (Talking Music, William Duckworth). This is not just due to the massive scope of the pieces – several last a number of hours in duration – nor to their formidable technical demands, although both of these aspects of Sorabji’s music are ubiquitous. The notation of the music poses challenges as well. It is a welter of corruscating counterpoint and its rhythmic shapes are seldom delineated with bar-lines; nor do their gestures readily suggest metricity. Dynamics and tempo indications are infrequent and the music is often laid out on several staves. Thus, a lot is left open to interpretation.

Despite these challenges, Sorabji’s music is being documented by stalwart performers. Happily, a performance practice for the music is taking root that is helping to clarify some of the aforementioned difficulties. Noteworthy among these interpreters is the English pianist Jonathan Powell, who has championed the composer for over two decades. He has taken a number of Sorabji’s works in manuscript and transcribed them into performing editions, toured them widely, and begun the challenging task of creating recorded documentation of the piano oeuvre. His most recent project has been Sequentia Cyclica, a piece lasting nearly eight hours that he has presented in marathon single-day concerts in the United Kingdom, Europe, and the United States. Piano Classics has released a seven-CD boxed set of Powell’s rendition of the piece. It is an extraordinary recording of a totemic work.

Sequentia Cyclica (subtitled Super Dies Irae ex Missa Pro Defunctis) is a set of twenty-seven variations on the Dies Irae sequence from the Catholic liturgy of the Mass for the Dead. Composed sometime in the thirteenth century, the Dies Irae has taken on extra-liturgical significance through its use in a number of concert works from the nineteenth and twentieth centuries, most famously in  the Symphony Fantastique by Hector Berlioz, but also in a plethora of other piece including ones by Rachmaninoff, Saint-Saens, and Dallapiccola. Sorabji’s employment of the theme serves multiple ends. It gives a nod to its presence in works by predecessors, particularly in Rachmaninoff’s piano music, it serves as a contrapuntal motive that is treated with a near-encyclopedic array of variants, and, judged by the voluble praise-filled postscript appended to the work, as an object of Christian devotion. Sorabji made an initial (201-page long!) pass at a set of Dies Irae variations in the 1920s. They were to be dedicated to the recently departed composer and pianist Ferruccio Busoni, but the piece was withdrawn in favor of the 1949 version recorded here, dedicated to Busoni’s pupil the pianist Egon Petri (1881-1962).

True, eight hours is a long time to fill with a very familiar melody, but Sorabji creates a startling array of presentations, sometimes only employing the head motive and at other times the entire sequence. Elsewhere, it is submerged in other material, only to triumphantly rise up when called to the surface. Character pieces such as Hispanica, Marcia Funebre, and Quasi Debussy demonstrate imaginative deployments of the sequence in myriad styles. Trying to play “spot the influences” will provide the listener with glimpses at a panoply of creators, including Busoni, Liszt, Alkan, Debussy, Beethoven, Bach, Messiaen, and Rachmaninoff, to supply just a partial listing. None of these reference points is overarching; it is remarkable how adroitly Sorabji distills their essence into his own distinctive language. An enormous passacaglia with 100 variations takes up a disc-and-a-half worth of the recording and the piece concludes with an eighty-minute long fugue that successively builds from two-voice counterpoint to six, followed by a stretto on steroids that rousingly concludes this magnum opus.

Jonathan Powell’s traversal of Sequentia Cyclica is authoritative. The program notes are some of the finest I have read in a long while. His performance is deftly nuanced, technically assured, and powerfully rendered. It is a benchmark that will provide a tough act for future interpreters to follow, but hopefully his performance editions will encourage them to do so regardless. Powell’s dedicated work on behalf of Sorabji makes the composer’s legacy seem assured.