Home > News > Songs of Love and Exile – A Sephardic Journey

Songs of Love and Exile – A Sephardic Journey 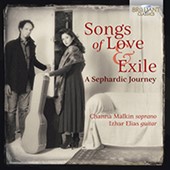 Both artists on this disc are from Jewish families who were forced to evade pogroms, flee, and re-settle in new lands, sometimes time and again. This disc, therefore, is more than an academic project for them – it tells their stories too, and those of their own families, making this an intensely personal recording for them. This comes through, both in the booklet notes – which include a paragraph each telling the stories of their own families’ persecutions and travels – and in the music-making.

The works featured fall into two main parts – the first are traditional Sephardic songs, which are here presented in arrangements (only the words and melodies having been preserved), sometimes by the artists themselves, and othertimes by contemporary composers, such as Daniel Akiva, Lorenzo Palomo and Joaquin Rodrigo. These songs deal with the topics of love, war, death, motherhood and suchlike – the words themselves are full of dark, often melancholic beauty, which is only exacerbated by the settings and performances. These are deeply evocative, atmospheric and haunting works – full of yearning and passion, and they are excellently performed by Malkin and Elias – Malkin’s dark and rich soprano voice working very well in these songs, especially in her superb delivery of the Arabic ornamentation that lends the songs such an exotic and appealing air and haunting quality.

The second part is formed of a song-cycle by the Italian Jewish composer Mario Castelnuovo-Tedesco, who was forced to flee to America. His interest in his Jewish roots only intensified and he identified strongly with the poems of the 11th-to-12th century Spanish-Jewish poet, Moses Ibn Ezra, another exile, several of whose poems he set as The divan of Moses-Ibn Erza. The performances of these are radiant and full of life.

The booklet is well-produced, with full texts and translations of the songs featured, although editing could have been tighter. One small criticism of the performances is that there is, regrettably, some ugly gasping and breath-grabbing occasionally, which in certain songs (such as the opening Castelnuovo-Tedesco song, Drink Deep, my friend) does rather intrude. On the whole, however, a good release of some captivating music, performed with passion and understanding.