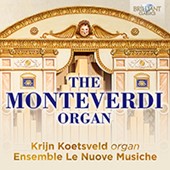 This recording features a reconstruction of the organo di legno, an instrument described by Monteverdi as ‘soavissimo’, when writing of his Friday concerts in the Sala dei Specchi in Mantua’s ducal palace, and one which he prescribed in his printed score of Orfeo. It was thought most suitable for accompanying the human voice. There has been lots of recent interest in open wooden-pipe organs (including a session at the 2019 Medieval and Renaissance Music conference in Basel), sparked by a realisation that the chamber organ with stopped wooden pipes, beloved of early music groups because of its portability, does not represent the instrument known to Monteverdi and his contemporaries. Oddly, the sleeve notes to the CD under review say that no such instrument survives whereas, in fact, one famously does in the Silberne Kappelle in Innsbruck. Dating from the 1580s, it is thought to have arrived there from Mantua through Anna Caterina Gonzaga who married Archduke Ferdinand in 1582. Various copies have been made and can be heard on the internet, as can the Innsbruck original. In particular, readers of EMR can consult David Stancliffe’s review of Walter Chinaglia’s book and website describing the latter’s reconstruction of this organ (EMR2015 – early music review). It seems odd that Krijn Koetsveld, and the Klop firm of organ builders who have built the organ used on this CD, are not aware of all this.

The hand-pumped Klop organ has a lovely mellow tone and well-balanced voicing, and is shown to full advantage on this disc, both as a solo instrument and in accompanying a series of sacred and secular pieces from Monteverdi’s Selva morale of 1640/41. The sleeve notes do not provide a stop list and do not discuss the rationale behind the choice of items presented. In terms of showcasing the organo di legno, one could imagine a different sort of programme – one which also exploited its importance in chamber settings. This recording was done in the Martinuskerk in Hoogland, Netherlands which has a big acoustic; the instrument is also recorded at some distance. The opening track, a Froberger Toccata, serves to establish a church context, which is continued by a Salve Regina setting from the Selva morale, and later by excerpts from Frescobaldi’s Fiori musicali. Recorded in that same acoustic, the madrigals also have a more public than private feel. That said, the inclusion of Frescobaldi’s Ricercar con obligo di cantare with its Sancta Maria, ora pro nobis refrain does conjure up something of the sound of an oratory where such an instrument would have been particularly useful. Canzonas by Merula and Frescobaldi come across best, with good variety in registration, as does a Frescobaldi Capriccio. Koetsveld is ablest in such imitative music; his playing of two Frescobaldi Toccatas, one for the Elevation, is rather too fast and lacking in the nuance and improvisatory feel that these pieces demand.

The voices of Le nuove musiche, singly and collectively, provide the vocal music; this group specialises in singing Monteverdi and is currently engaged in recording all his madrigals as well as the complete Selva morale; this CD is something of a spin-off from these projects. The singers give a good account of themselves, though more rhythmic flexibility would have been welcome here also. Particularly striking is Ab aeterno ordinata sum – thought to have been written for the same bass singer as sang Caronte in Orfeo; Bas Ramselaar is supremely confident throughout its two-octave range. Despite some shortcomings, this is a welcome recording which will hopefully increase interest in the open-pipe organo di legno.