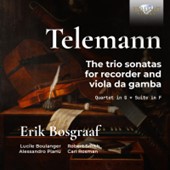 Georg Philipp Telemann was undoubtedly the most creative composer of his time. In his oeuvre we find more unusual combinations of instruments than in that of any of his contemporaries. The disc under review here attests to that. The combination of a wind instrument - transverse flute or recorder - and viola da gamba is not very common, but his writing for a treble viol (dessus de viole) is quite unique (the only other German composer who wrote for this instrument seems to have been Johann Melchior Molter). It bears witness to his love of the French style. In France, this instrument was still common in the first decades of the 18th century, but was soon replaced by the pardessus de viole, which was able to play music that was originally written for the violin. Telemann treats it differently, in accordance with the nature of the instrument, as he always did. Thiemo Wind, in his liner-notes, refers to Jean Rousseau, who in his Traité de la viole (1687) stated that the dessus does not want to be treated like a violin, "the character of which is to animate, while the dessus de viole flatters".

In his parts for the treble viol expression is more important than technical virtuosity. The latter was something Telemann did not like very much anyway - one of the reasons he was sceptical of the Italian style and preferred the French. The pieces on this disc prove that the combination of recorder and treble viol is a pretty ideal one, as the dynamic possibilities of both are limited. The two instruments are treated on equal footing, but differently from one piece to the other. The Sonata in G minor (TWV 42,g9) is one of the most impressive examples, and Wind rightly comments on it in detail. Very different is the Sonata in C (TWV 42,C2), in which the two instruments play in canon in all four movements. Obviously, Polish folk music is never far away, as the Sonata in D minor (TWV 42,d7) proves.

Telemann was not only acknowledged as a master of the trio sonata, but his quartets were also considered models of the genre. It was the quartet with which a composer could prove his command of counterpoint. The Quartet (or Sonata à 4) in G is a perfect example. It is originally scored for transverse flute and two bass viols with basso continuo. Here the flute part is played on the voice flute, a tenor recorder in D, which allows the performance of the original part without transposition. Here the three instruments are treated equally, but they mostly play in different combinations of two versus one. The andante is notable for its striking harmonic progressions.

The disc ends with another example of Telemann's creativity in his use of instruments. Only a few composers wrote music for the chalumeau, which was a relatively new development. Christoph Graupner used it frequently, whereas Johann Sebastian Bach never wrote anything for it. The Suite in F is scored for two chalumeaus (alto and tenor), two violas and basso continuo. The inclusion of two violas is also unusual, as the viola usually was not more than filling in the harmony. In this recording the two viola parts are played on bass viols. That is fully justified, as in German music history the viola and the bass viol were often treated as alternatives. It is a fitting close to this delightful disc, where we hear Telemann at his very best.

One can just hear how much the performers were enjoying themselves while playing these pieces. They are musically challenging, probably not so much technically, but with regard to bringing out the specific qualities of each item. These are top-class artists, and it is hard to imagine better performances than we get here. The ensemble is immaculate, and the individual contributions are excellent. Telemann lovers undoubtedly have almost all the pieces on this disc in other performances (the suite may be the exception). That should not withhold them from adding this disc. It will be a jewel in their Telemann collection.